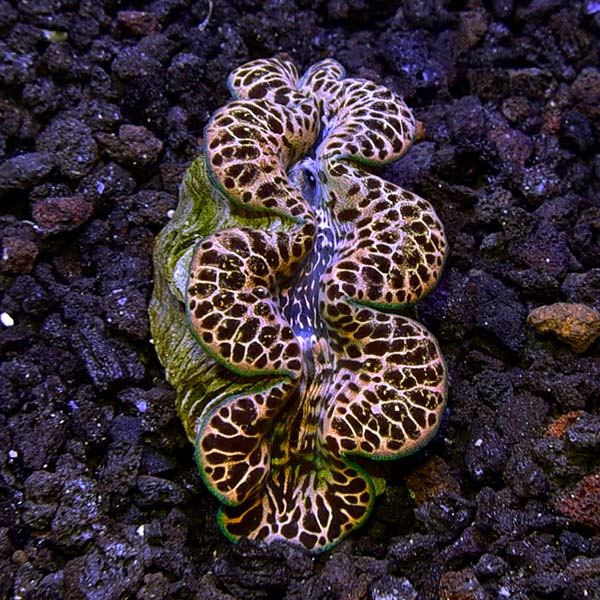 The ORA® Aquacultured Gold Maxima Clam is a lovely color variety of Tridacna clam known as the Small Giant Clam and is one of the most widely recognized species of giant clams. Sporting attractive shades of golden coloration ranging from a deep caramel to bright yellow, the ORA Gold Maxima Clam is truly an exceptional sight to behold. With its rich pattern and vivid coloration, the ORA Gold Maxima Clam makes for a spectacular display in reef aquariums especially when properly illuminated. Maxima Clams are known to live together in great congregations and can attain a maximum size of 12" in the wild.

Maxima Clams can be identified by their elongated shell that lacks symmetry and narrowly spaced scutes or scallops on the upper portions of each side of their hinged shells. Like some other members of its genus, Maxima clams attach to hard substrate or rockwork with thread-like structures called byssal filaments and can eventually burrow or bore into porous substrate over time.

Smaller ORA Maxima clams tend to be more sensitive to very intense lighting as their membrane is much thinner than larger specimens. For this reason, care should be taken to properly photo-adapt them to your reef aquarium lighting in a similar manner when introducing new stony and soft corals. When photo-adapting a new Maxima Clam to very intense lighting, it is ideal to set them on a small rock or in a plastic dish with coarse substrate placed at the bottom of the aquarium. Over time, the clam can then be slowly moved up higher in the aquarium.

The ORA Gold Maxima Clam relies heavily on the photosynthetic zooxanthellae cells growing in its mantle to satisfy the majority of its nutritional needs. However, all clams also require micro foods designed for filter feeders, especially when small. Offer phytoplankton and other micro foods.