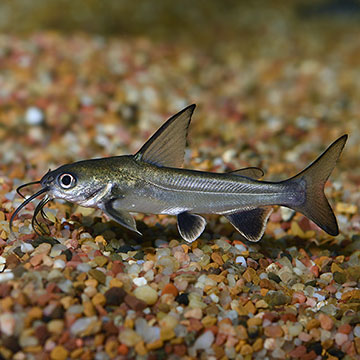 Also known as the Black Fin Shark, the Columbian Shark is a catfish which will grow quite large in an aquarium. It may also be referred to as Jordan's Catfish or the West American Cat Shark. The Columbian Shark has a high fin and long "whiskers" that gives it a classic catfish appearance.

Setting up a tank to match its natural environment will require plenty of plants and rocks. Since it grows quite large, starting with a minimum tank size of 70 gallons is recommended. As the Columbian Shark grows larger, there is a chance that the shark will eat smaller tank mates. This species prefers some aquarium salt in the water, and may also be acclimated slowly into a saltwater aquarium, as they live in both freshwater and saltwater during different times of their life.

The female Columbian Shark will lay the eggs and the male will incubate them in his mouth to protect them.

Write a Testimonial | Ask Customer Service
Toby Crabbe Phoenix , AZ
I have 2 of these in a 180 gal cichlid tank. The other fish (all semi to aggressive) don't mess with them at all. These fish "hit" with their tails or their mouths when feeling threatened. They have carved out their own niche in the tank. Great fish to have in this type of set up.
Burt Lancaster Millersville , MD
This is a neat fish to have, very active with the lights on or off. I have never seen them to be aggressive. They get large quick though. I have one in a 45-gallon and he is the largest fish I have. A good buy.
Julie Cafaro Westerville , OH
This is my son's favorite fish. Very lively, and fun to watch. We bought him at a local discount store, but we should have come to your site first! Thanks for providing all this information!
Darrell Brown Las Vegas , NV
While the Columbian Shark is considered semi-aggressive, I have never seen any aggressive behavior towards any of my fish. I have 3 in a 55-gallon tank and their favorite food is frozen or live bloodworms - they go crazy. Pictus catfish make great tank mates for them, as they have the same temperament.
Zack Carter York , PA
I have one of these guys- very lively fish. He bullys around my Barakutta Shark and my Bumble Bee Catfish bullys him around, it's like a chain. My Columbian Shark is only about 3-4". I barely see him eat when I'm around. Very pretty shark!
Robbert Smith Rochester , AL
I have three Columbian Sharks in my 210 gallon brackish setup. The largest is just under a foot. As these fish get older, they will get darker when introduced to more salt in the water. Their tank mates are a school of Archers, two Figure Eight Puffers and 10 various types of cats and they all get along very well. Very good fish to have if you can provide a big enough tank.
1-6 of 6 testimonials