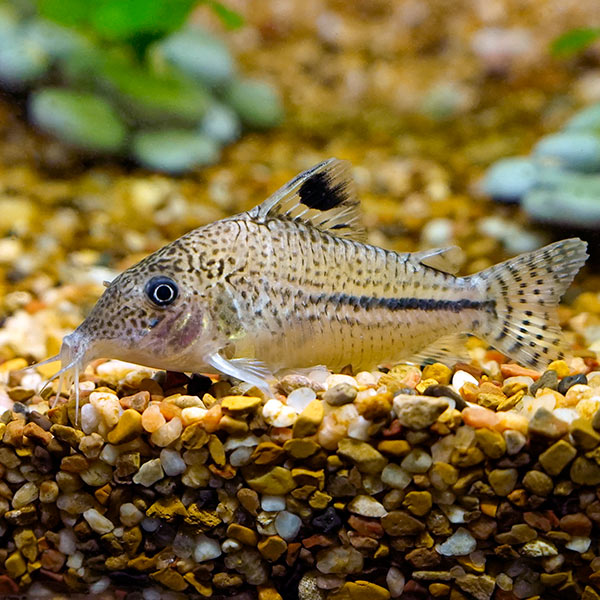 The Leopard Catfish Corydoras julii is rarer than other similar species. It is an egg layer but attempts to breed in captivity have proven unsuccessful. An attractive specimen to collect because of its coloration that resembles its mammal namesake, it has a whitish gray body with spotted markings in a black color. Another distinguishing feature is a large dark spot on its dorsal fin. Growing to a maximum of 3”, the Leopard Catfish that LiveAquaria® offers is from Columbia. It is a member of the Callichthyidae family, or armored Catfish, so instead of scales, it has bony or armored plates.

Though small, this Catfish is not defenseless; with hardened pectoral spines that can pierce human skin, it should be handled with care, and moved using a container, as it can become entangled in nets. In addition, the base of each spine contains glands that secrete a mildly toxic substance.

The Leopard Catfish retrieves oxygen from the water but also can breathe atmospheric air. It will rise to the water level to take in air, so aquariums should not be filled completely, and should have a lid. An aquarium of 20 gallons or more meets the requirement for this small fish. Water should be maintained at a temperature range of 72-79° F, pH range of 6.0-8.0, and within a 2-25 dH range.

This Corydoras julii enjoys a planted aquarium with hiding places and a fine sand or small rounded gravel substrate. It does well in small groups that contain only one male and makes a great tankmate in a community environment with other peaceful fish that are not fin nippers.

Omnivores, this member of the Callichthyidae family should be fed food that sinks to the substrate, like live and frozen foods as well as plant matter. Their barbels help them locate food.