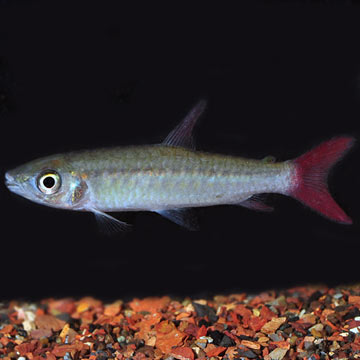 The long, sleek Pinktail Chalceus is an active, mid-to-top swimming predator with great eye-appeal and personality. In addition to its bright pink tail, Chalceus macrolepidotus boasts rather large silver iridescent scales on its upper body gradually getting smaller as they descend down the belly. There is a dark spot near the gill cover, and fins range from a dark red to a pale orange or yellow. The upper part of the iris is also orange to yellow.

In the wild, the Pinktail Chalceus are found in highly-oxygenated rivers in South America. They are known to leap from the water to catch insects, so an aquarium with a tight-fitting lid is essential to keep this escape artist in healthy captivity. The Pinktail Chalceus can tolerate a wide range of water parameters, but thrive best as individuals in 55 gallon or larger aggressive aquariums with excellent filtration and water movement.

The Pinktail Chalceus will take all types of live food as well as frozen, flakes, and pellets.

Write a Testimonial | Ask Customer Service
Brian Jonesboro AR
I love this fish. I hand feed him lots of live insects. Has eaten a few fish though. Really awesome guy. Not difficult to take care of. Does not like my son being near the tank.
K Leigh Stump
Absolutely PERFECT PinkTailed Chalceus ! Thank you So Much! Well we lost our last shipment due to the cold weather and a delay with the shipment. This sweet guy arrived warm, safe, and sound, and was released into our 75 gallon tank after the induction process. He is beautiful, active, and HEALTHY! Best of all he is an early birthday present for my husband. We lost one almost identical to this guy when someone left the lid opened and he jumped out. We are almost at capacity, although we could use a few large fish in with our Blue Acaras who have gotten huge overnight it seems. Thank you again!
John Shiao Carrollton , TX
Bought 12. 2 died within 24 hours. 2 more died within 1 week. A month later only 4 are alive. I am an experienced aquarist w 3 large tanks. The fish were put in a 125g tank with no aggressive fish. This species under 2" is fragile. I received 1 5/8" - 2" fish. Likely, the fish were not acclimated and too young. And the stress from travel didn't help. I did get a partial store credit on 4. Better to buy at 4+" and pay $20 at LFS.
John
1-4 of 4 testimonials