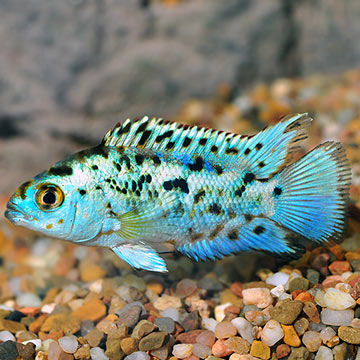 We're pleased to offer the Electric Blue Jack Demsey, an uncommon but natural variant of Nandopsis octofasciatum. Adorned in brilliant blue, this showcase cichlid is typically smaller and reported to be less aggressive than its popular counterpart.

The Electric Blue Jack Dempsey is a freshwater fish that originates in the murky warm waters of Central America. It has a base color of electric blue to gray, and displays many iridescent blue and green spots, giving this fish a spectacular look. When breeding, these colors will intensify. The dorsal fin is lined in red, and the female's overall coloration is subdued compared to the male.

The Electric Blue Jack Dempsey requires an aquarium of at least 50 gallons, with a fine sand bottom. There should be rocks and roots for them to hide among. The plants should be hardy as the Jack Dempsey will burrow around and attack them. The aquarium should be divided into territories using hardy plants, if possible. They are territorial and will eat smaller fish that they can swallow.

Neutral water with soft to medium hardness, a pH of approximately 7.0, and temperatures of 78-82°F is recommended. Jack Dempsey's are open breeders that need well-oxygenated water. They spawn in burrows, laying up to 500 eggs. The fry are well protected by the parents, and once mated, they will continue to spawn once the fry have grown.

Write a Testimonial | Ask Customer Service
Scott B Fargo , ND
Be sure to use a dark substrate in your tank if you have this fish; lighter colors wash out their brillant blues. This is a must have fish for New World Cichlid lovers
Jimmy Nunley Coalmont , TN
I bought this Electric Blue Jack, I am very pleased with this purchase I like him better than my other Jack. He seems less aggressive and slower he is particular about food he like baby dried shrimp and he doesn’t care for anything else. Overall very cute Jack.
1-2 of 2 testimonials