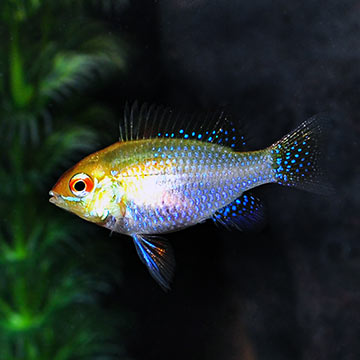 The German Gold Ram is a beautiful color variation of Mikrogeophagus ramirezi. It is a social fish that will form pairs and often remain "faithful" to each other. German Gold Rams have a gold body with hints of pink, orange, and red.

The German Gold Ram requires a tank of 20 gallons, minimum. The tank should have several dense plant groups and plenty of open swimming space. The German Gold Ram will also need a few caves in which to hide in and stones to spawn on. Being a peaceful fish, the German Gold Ram makes a wonderful addition to the community tank. However, if kept in an aquarium that lacks hiding places for this fish, they may become aggressive toward small tank mates.

The German Gold Ram is an egg layer that prefers soft to medium hardness, neutral pH, and slightly raised water temperatures (77-82°F). Peat should be added to the water. The female will lay up to 200 eggs on stones and occasionally, in depressions. Both the male and female share the rearing of the fry, and it has been reported that they will take them into their mouths to protect them like a mouth brooder. Care should be taken so that the fry are not sucked into the filter.