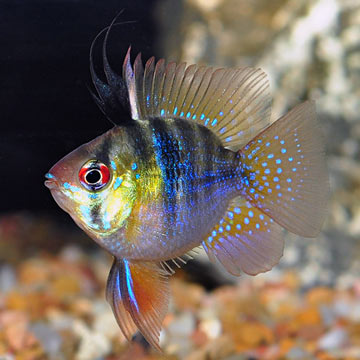 The Ram is prized for its winning personality despite its fierce appearance. With its spiked dorsal fin, low-slung pectoral fins, Mikrogeophagus ramirezi appears to be an aquarium bulldog. However, this member of the Cichlidae family is actually one of the more social and peaceful freshwater fish. In fact, most Rams will actively swim with equally non-aggressive members of your community aquarium and are known to faithfully pair with just one other mate. The Angel Ram is known for its mottled deep blue splotches of color.

For the best care, the Ram should be kept in an aquarium of at least 20 gallons with several dense plant groups scattered around plenty of open swimming space. The Ram also needs a few caves in which to hide and, if breeding, flat stones on which the female can lay her eggs. Though the Ram is very peaceful, both females and males can become aggressive towards other fish when hiding places are lacking or when tending to their eggs.

Write a Testimonial | Ask Customer Service
Paul Wofford Nampa , ID
This guy is my favorite fish. I introduced him into an establish 29 gallon tank. My tank has an electric blue ram and several kinds of gourami and cats. This guy fit right in. A few displays of dominance with the other ram, but nothing too vicious. Just some head shaking or some pushing, but never any nipping. Both ram leave the gourami alone unless they want to swim with them. They mostly hang out together peacefully.The coloration on these guys are amazing and their shape is so different than anything else, he looks almost like a saltwater fish. The black stripes are far more visible than on my electric blue ram. The only thing is that they are fairly hard to find as they are a fairly new breed.If you see one and want a little chiclid that can fit into a community tank, this is your guy.
1-1 of 1 testimonials