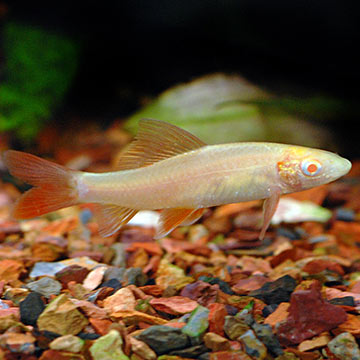 The Albino Rainbow Shark, also known as the Albino Ruby Shark or Albino Red-Finned Shark, is great for the semi-aggressive community aquarium, as long as they are the sole sharks and the other tankmates are of similar size. The Rainbow Shark is a beautifully colored fish which is a pink with bright red fins, and red eyes.

It requires a large aquarium with driftwood, rocks, and spots of dense vegetation. This shark may set up territories around the aquarium. The Rainbow Shark will become very aggressive towards its own species when mature.

Unfortunately, the breeding habits of the Albino Rainbow Shark have not been documented.

An omnivore, the Albino Rainbow Shark is not a particularly finicky eater. Flake food, freeze-dried bloodworms and tubifex, as well as vegetable-based foods should be fed.

Write a Testimonial | Ask Customer Service
Jessica M Palm Beach Gardens , FL
I have one of the Albino Rainbow Shark and he/she stays in one place - his favorite rainbow hiding place. He sometimes rams the two black mollies and my Albino Cory Cat. He usually never eats when I am around. In my opinion they are very pretty and I love them.
Jake C Wilmington , OH
The albino rainbow shark was my first shark and is my favorite as long as you have hiding spots its not very aggresive and can even go with my other fish like my bullhead catfish which is a very agresive fish but they coexist fine
Roger T Mount Dora , FL
I am new with aquarium, I have 2 albino sharks and 3 Columbian Tetras 5 Rasboras, the larger of the 2 sharks chases the other one around other than that, they all get along
1-3 of 3 testimonials