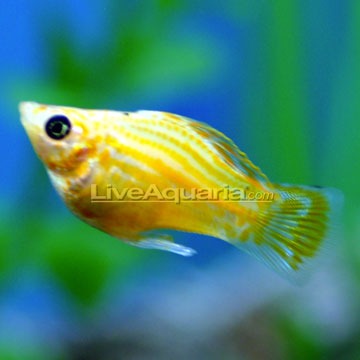 The Balloon Molly is a hybrid variation of Poecilia latipinna,the Sailfin Molly. The Balloon Molly has an arched back and a rounded, large belly.  Color varieties include a combination of black, yellow, and white. These fish also have a large, lyre-shaped caudal fin and an impressive dorsal fin. Mollies have the ability to adapt to a variety of salt levels in the aquarium. With a gradual acclimation, these fish may be maintained in either a freshwater aquarium or a saltwater aquarium. In the freshwater aquarium, a teaspoon of aquarium salt per gallon is recommended for optimum health.

The Balloon Molly prefers a tank of at least 30 gallons with lots of strong plants such as Java fern, Sagittaria, Vallisneria and Anubias. They require a good filtration system because of their hearty appetites. The Balloon Molly is well suited for the community tank because of its peaceful nature, and is compatible with other peaceful, large fish that can withstand similar water conditions. They may pursue their young and the young of other fish.

The Balloon Molly is omnivorous and requires both meaty foods as well as algae. Provide these fish with an algae-based flake food, as well as freeze-dried bloodworms, tubifex, and brine shrimp.

Write a Testimonial | Ask Customer Service
Jorie J Arlington Heights , IL
I've got five Balloon Mollies in my 46-gallon freshwater community aquarium. They are hardy, easy to care for, full of personality, and they never cease to make me laugh. I love these guys!
Bill H Hagerstown , MD
We have 13 balloon mollies in our 55 gallon tank. Everytime you look in the tank there is the balloons looking back at you and they will follow you when you move. Never had any problems with them; they are very hardy like our other mollies.
John B Newtown , CT
I have one balloon molly in my 30 gallon tank she does great with my other tank mates except for occasionally nipping my swordtail.
Dee Dee D Sacramento , CA
Love my balloon mollies! I have five of them, all females, in their own tank. They're friendly, colorful, and very entertaining! You can even feed them by hand. If you keep males and females together, have 1 male for every 2 to 3 females to minimize harassment of the girls by the males.
1-4 of 4 testimonials