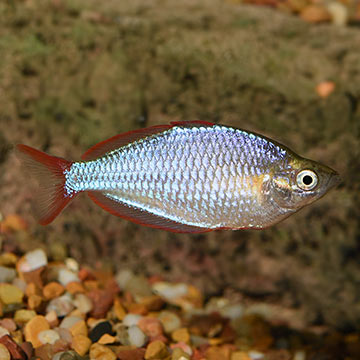 The Praecox Rainbow, otherwise known as the Dwarf Neon Rainbow, is a peaceful schooling fish. Rainbowfish are known for their characteristic large eyes, black or silver band that runs through the middle scale rows, deeply forked mouths, and two dorsal fins.

A planted aquarium with plenty of free swimming places available will provide a good environment for Melanotaenia praecox. A dark colored gravel substrate may intensify the Praecox Rainbow's colors.

The Praecox Rainbow is an egg layer that spawns over a moss substrate. At a temperature of around 75°F, the fry will hatch after six or seven days. Adults should be removed from the fry after hatching. Fry should be fed small pieces of live foods such as brine shrimp.

Although Praecox Rainbows have large mouths, their throats tend to be narrow. With this in mind, foods should not be too large. The Praecox Rainbow should be fed an omnivorous diet of prepared flakes, frozen, and live foods.

Write a Testimonial | Ask Customer Service
Connor R Kenner , LA
These are beautiful fish that are always active and can be seen during the day. Their colors show more if they are in groups. They can be a little pricey, but in my opinion, they're worth it.
Judy D Lima , OH
These Dwarf rainbows are prefect for smaller aquariums. I have 4 males in my 20 gallon. Rainbows are my favorite fish. I have 12 of various varieties in my 75 gallon aquarium and wanted some to enjoy in my 20 gallon. Their fins do show gorgeous red coloring and their silvery bodies reflect cool blues and violets. The males will have a wider body (as the specimen pictured) - the females have a more slender body shape. My Dwarf rainbows live with a variety of tetras and 2 young turquoise rainbows (that are too small yet for my 75 gallon aquarium). As with all rainbows, you will want more than one for best display of color.
1-2 of 2 testimonials