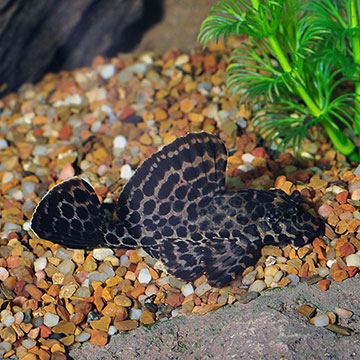 The Sailfin Pleco comes from the rivers and tributaries of South America. The body is different shades of brown with a pattern of lighter markings covering it. This species receives its name from its large dorsal fin. Sailfin Plecos make good additions to any community aquarium.

Planted aquariums with hearty, fast-growing plants, high aeration, and water movement make for a healthy environment. Rocks and driftwood help to accent a natural habitat and provide hiding spaces to reduce stress for the Sailfin Plecostomus. A recommended minimum tank of 125 gallons should be provided to house this fish.

The Sailfin Plecostomus spawns in tunnels dug out of the mud banks of various tributaries. A very large aquarium with a wall of mud is required for this species to spawn. Because of this requirement, it has not yet been done in an aquarium.

Feeding the Sailfin Plecostomus is not difficult due to the fact that it is not a picky eater. Feeding off the bottom of the aquarium, it gets most of its nutrition from left over food and algae. If there is no algae or left over food present, supplement with high quality flake food, sinking carnivore pellets, freeze-dried bloodworms, and tubifex.

This fish was a great addition to my cichlid tank. Not overly shy, it will eat flakes, pellets, and algae discs. I recommend this fish to other aquarists.
Anna Fang Okmulgee , OK
This is a very peaceful fish that gets along with a variety of small community fish and can also stand up to some more aggressive fish like cichlids. It is easy to feed and will accept most vegetarian-based food and scavenge for annoying algae and leftover fish food. If fed well, it will not disturb hardier plants like Amazon Swords.
1-2 of 2 testimonials