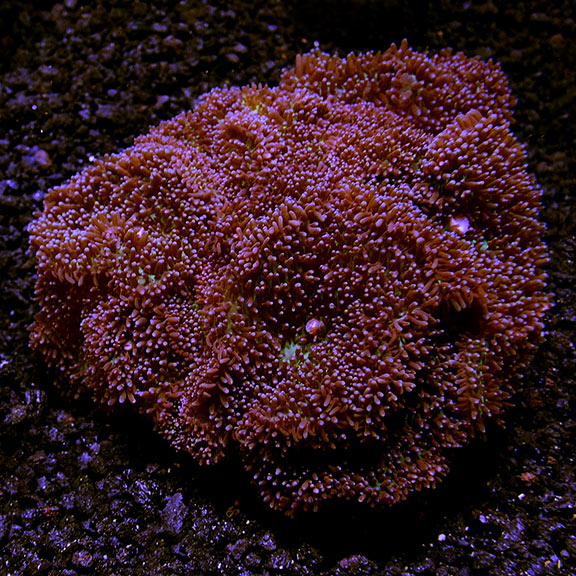 The Lavender Mushroom is a member of the Rhodactis genus, formerly called Discosoma. It generally grows larger and has shorter tentacles than other mushroom corals.

The Lavender Mushroom is easy to maintain in the reef aquarium, and a good choice for the beginner hobbyist. It is somewhat aggressive, however, and can harm sessile invertebrates and overgrow other inhabitants of the reef. It requires a low to medium light level combined with a medium water movement within the aquarium.

It may reproduce in the home aquarium provided that water conditions are adequate, sometimes causing over-population. A small portion of the base or mouth will separate from the parent polyp and grow into a full sized mushroom within a few months.

The symbiotic algae zooxanthellae hosted within its body provide some of its nutritional requirements, but it also eats plankton and some larger organisms.

It ships as several individual mushrooms attached to one rock.

Write a Testimonial | Ask Customer Service
Brad Thompson Fort Worth , TX
a Lavender mushroom is probablay the best kind of mushroom. I love it. It's great in any reef aquarium and mine is doing wonderful!!
1-1 of 1 testimonials