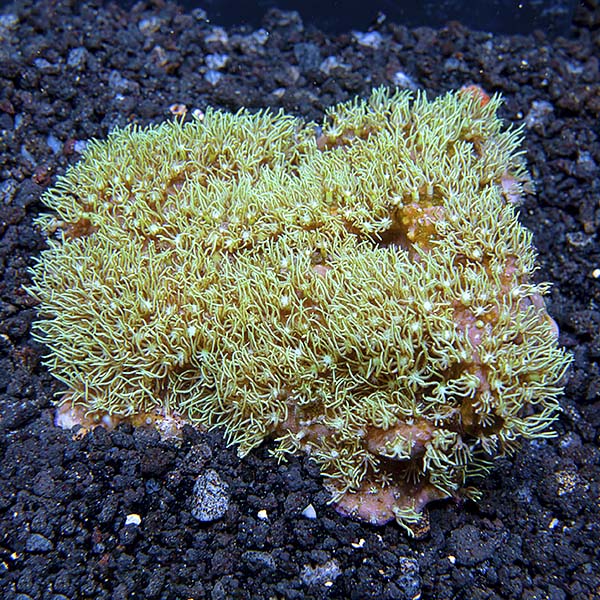 Starburst Polyps are also referred to as Star, Eight Tentacle, Mat, or Daisy Polyps. Previously green specimens have been called Clavularia viridis; however, they are now identified as a Briareium sp. They have the distinctive eight-leaved tentacles on each polyp. They are colonial animals with several individual polyps attached to a piece of live rock.

Accurately described as an encrusting coral, Starburst Polyps rapidly grow over adjacent rock work, coral, or even the glass of an established reef aquarium. They are a peaceful coral armed with the defensive capability of being able to retract or deflate each of their polyps in response to predation. They will not harm other corals that are placed close to their colony, but are susceptible to being damaged by any aggressive corals in the reef aquarium. They are easy to maintain in the reef aquarium and make an excellent candidate for the beginning through expert reef aquarist. They require a medium to high light level combined with a medium to strong water movement within the aquarium. For continued good health, they will also require the addition of iodine and other trace elements to the water.

The experienced hobbyist cultures the colony by taking a cutting from their encrusting base. The cutting is then glued to a hard substrate such as a rock or dead coral head.

The symbiotic algae zooxanthellae hosted within their bodies provide the majority of their nutritional requirements through photosynthesis. They also benefit from weekly feedings of micro-plankton or foods designed for filter feeding invertebrates.

I purchased this hardy coral more than a year ago. This coral has survived – even with all my errors in judgment. On one occasion, my salinity levels were very high for over a week. Once I corrected the problem, the polyps quickly recovered, growing back any and all damaged areas. I highly recommend this coral to beginners, as long as you have a good combination of day and actinic lights. You should also provide phytoplankton and iodine supplements for this coral.
Michael Z Antigo , WI
This is a very easy coral to keep. Be careful with it because it tends to grow/ spread very quickly covering rocks and it may sting other corals.
1-3 of 3 testimonials