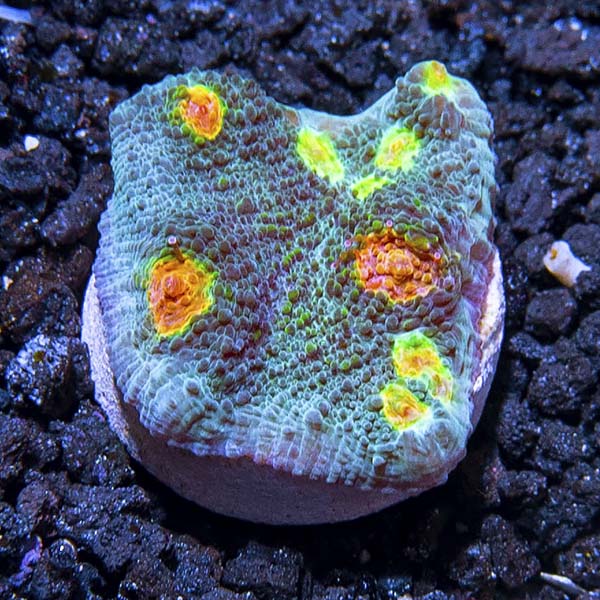 The Bomb Squad Chalice Coral boasts vibrant shades of blue, green and hints of purple with blaze orange and chartreuse “eyes”. The heavily-tissued, fleshy body of this Chalice Coral adds amazing texture and depth that animates the bold coloration to dramatic effect. This insanely incredible color morph is sure to be a must-have addition for the avid Chalice Coral collector or any reef aquarium hobbyists wanting a flush of exotic.

Care of the Chalice Coral is fairly straightforward as long as you maintain pristine water conditions. Chalice Corals prefer horizontal placement in areas of low to medium light and water movement. Keep in mind that the Chalice Coral can readily adapt to different amounts of lighting. Typically, a slow growing coral, the species is known to exhibit both an encrusting habit when placed near aquarium glass as well as a plating habit when housed in open areas.

The Chalice Coral may produce sweeper tentacles that may harm more docile corals and invertebrates. Be sure to provide sufficient space between the Chalice Coral and other corals because of its semi-aggressive temperament.

The Chalice Coral feeds mostly at night. Though feeding is not necessary, it benefits from small pieces of meaty marine food, such as baby brine shrimp, CYCLOP-EEZE®, or foods designed for filter feeding invertebrates. For continued good health, the Chalice Coral benefits from the addition of calcium, strontium, and other trace elements to the water column.