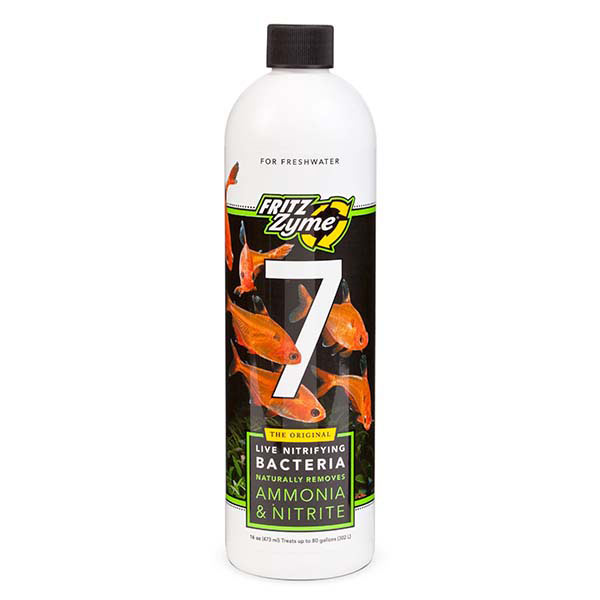 Additional sizes may be available!

Additional sizes may be available! Email me when available

Note: Live product. Do not freeze or overheat. Store in a cool, dark place. Use before expiration date.

About Fritz Aquatics
Fritz Industries was the first company to pioneer commercial-scale cultivation of nitrifying bacteria and has remained one of only a few in the world with continuous production for over 30 years.

Q. What levels of ammonia and nitrite should I see when using FritzZyme 7 Freshwater Nitrifying Bacteria?
A. You will see the normal “new tank syndrome” time greatly reduced or completely eliminated. The ammonia and nitrite levels, if present, will be well below stress levels. Problem systems will recover in a matter of days without extensive water changes.

Q. Do you need a weekly dose every week with FritzZyme 7 Freshwater Nitrifying Bacteria?
A. Normally, it is not necessary for you to put additional dosages of FritzZyme in your tank once the tank has cycled. Often, aquarium users place additional dosages in their tanks if they are adding new fish, are cleaning their filters or see an occasional ammonia or nitrite spike. If your aquarium is looking great and the ammonia and nitrites are at or near zero, it normally is not necessary to add additional product.

Q. Why not have a dry version of FritzZyme 7 or FritzZyme 9?
A. FritzZyme contains true nitrifying bacteria. These bacteria have a low survival rate when dried or freeze-dried. Low survival rates mean very few viable “living” nitrifying bacteria would be added to the aquarium. Although competitors claim to have dry versions, tests have shown that these products actually do not establish the biofilter significantly faster than the biofilter would have established on its own.

Q. Why does it take so long for an aquarium to cycle without FritzZyme Nitrifying Bacteria?
A. In comparison to other types of bacteria, nitrifying bacteria grow very slowly. Under optimal conditions, it takes fully 15 hours for a colony to double in size! By adding FritzZyme Nitrifying Bacteria, you are adding bacteria to your system in amounts that would have taken weeks to naturally grow.

Q. What if my nitrites will not go down in my freshwater aquarium treated with FritzZyme Nitrifying Bacteria?
A. In freshwater, this situation occurs occasionally and the first thing that is recommended is to test your alkalinity. In aquariums with an alkalinity below a 4.5 dKH (1.6 Meq/l), the bacteria that convert the nitrite to nitrate simply stop the conversion process. However, after raising alkalinity to a minimum of 4.5 dKH (1.6 Meq/l) but ideally 5.6 dKH (2.0 Meq/l), nitrite conversion proceeds rapidly. In very, very rare cases the nitrite portion of the cycle remains stalled. In that situation, check your phosphate levels. Nitrifying bacteria, like all living organisms, need trace amounts of phosphate to function. A fishless cycle using ammonium chloride and RO/DI water may have 0.00ppm phosphates and will not complete the cycle. Even a trace amount of phosphate will allow the nitrifying bacteria to rapidly convert nitrite to nitrate. Fish food is a source of phosphate and Fritz pH Neutralizer contains phosphates. 1/8 to 1/4 the standard dose would provide enough phosphate for nitrite conversion.

Q. What is the difference between FritzZyme 7 and FritzZyme 9 Nitrifying Bacteria?
A. FritzZyme 7 is for freshwater use and FritzZyme 9 is for brackish and saltwater use. Both FritzZyme 7 and 9 work the same natural way, but the species of bacteria differ in order to achieve the best results possible in each environment. By having separate products with optimum species for each environment, the “lag time” for the bacteria to adjust is avoided. If the wrong FritzZyme is used, you will not achieve the needed ammonia and/or nitrite control. Introduce the correct FritzZyme as soon as possible. Water changes to remove the incorrect FritzZyme will not be necessary.

Q. Do I need to add an initial ammonia source for the nitrifying bacteria of a new tank?
A. Your fish will provide the necessary ammonia. The advantage of using FritzZyme is that you can add the fish right away to a new tank (without adding any ammonia); this is the recommended method. Slight increase in ammonia and nitrite levels may occur for a brief period, but they will be well below stress levels.

Q. How does FritzZyme Nitrifying Bacteria compare to other products?
A. FritzZyme Nitrifying Bacteria was the first product on the market to rapidly establish biological filters in aquatic systems. Having been on the market for over 15 years, it is the only time-proven product of its kind, becoming known as “the bacteria that works.” Since over 75% of the ammonia generated within the aquarium comes from direct excretion from the fish, it only makes sense to use bacterial products which provide the nitrifying bacteria to utilize this ammonia. If the product will not utilize ammonium chloride, it will not utilize the excreted ammonia. Therefore, although other products have been introduced on the market with many claims, be assured there is only one tested, proven FritzZyme.

In addition to FritzZyme being sold throughout the pet industry, the Fritz Pet division supplies FritzZyme to professional fish, shrimp and lobster farms, city aquariums, universities, research facilities and zoos throughout the world. Many entertainment parks are also regular users of FritzZyme. To these professionals, having a reliable product to establish and maintain their systems is of vital importance. They rely on FritzZyme.

Q. I recently purchased a new bottle of FritzZyme 7, is it supposed to smell?
A. The presence or absence of an odor is not a sign of effectiveness and can vary from batch to batch. If it is within shelf life the product should be fine.

Q. What products should not be used with FritzZyme Nitrifying Bacteria?
A. U.V. sterilizers, foam fractionators (protein skimmers) and ozone generators should not be used for at least 7-10 days after the addition of FritzZyme Nitrifying Bacteria. This allows the bacteria time to become attached so that they will not be killed or removed by these types of equipment. Many medications will also reduce the efficiency of the biofilter.

Q. Can I use copper medications with FritzZyme Nitrifying Bacteria in my marine aquarium?
A. The use of any medication in either fresh or saltwater aquariums should be avoided until the biofilter has become well-established. Any medications or water conditioners containing copper, formaldehyde, malachite green and methylene blue are extremely inhibitory or lethal to nitrifying bacteria. Occasional outbreaks of protozoan parasites during this period are usually due to ammonia-related stress. Treating with one of these chemicals only adds to the problem by allowing ammonia to reach toxic levels. It is advisable to remove infected fish to a quarantine or hospital tank for treatment. Once nitrifying bacteria have become well established, they will become tolerant to low levels of copper.

Q. Does the color or smell change the effectiveness or remaining shelf life of FritzZyme Nitrifying Bacteria?
A. No. Though the smell may range from none to a very strong pungent odor and the color from a rosy red to a grayish black, these factors do not affect product effectiveness. The true test of the product effectiveness is its ability to convert ammonia and/or nitrite. If the product has not expired and has been handled properly, it will be effective in the aquarium.

Q. What other products may be used with FritzZyme Nitrifying Bacteria?
A. Chlorine must be removed before adding FritzZyme Nitrifying Bacteria as chlorine kills bacteria. FritzGuard or Fritz Chlorine Remover may be used for this purpose. Fritz pH blocks for pH control, Fritz Super Salt for marine systems, Fritz Super Clarifier and Fritz Trace Elements may also be used without any adverse effect to the biofilter.