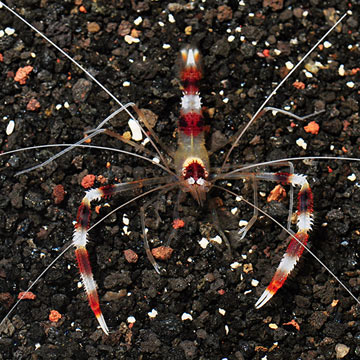 The Banded Coral Shrimp catches the eyes of most aquarists with their beautiful coloration and body shape. It has striking red and white bands across its body with fairly long pinchers and extra long white antennae. Combined with its prickly body texture, this peaceful member of the Stenopodidae family brings interest to any marine aquarium. However, most hobbyists praise Stenopus hispidus for its active nature as it scampers around the aquarium in search of food.

Native to the oceans of Indonesia, Stenopus hispidus is perhaps the most widely distributed shrimp in the sea. It usually hangs upside-down in caves or crevices, with only its antennae emerging from the hole. While molting, the Banded Coral Shrimp will often hide from sight for 1-2 days in the rocks of the reef. In the home aquarium, provide sufficient room for the Banded Coral Shrimp so it can move about freely without its long antennae touching neighboring corals or anemones.

In the wild, the Banded Coral Shrimp is a scavenger. In the home aquarium, it will accept most flaked and frozen foods.

Write a Testimonial | Ask Customer Service
Jim P House Springs , MO
Coral bandeds are good parasite eaters. Although I have observed them stealing food from soft corals and mushroom polyps.
Ghar K Atlantic City , NJ
Super easy to keep and very peaceful in ANY marine aquarium.
Tyson K West Unity , OH
I have a large Coral Banded Shrimp in my reef tank along with Leather Coral, Button Polyps, Star Polyps, a Sea Fan, a Sebae Anemone, and a Long Tentacle Anemone. The shrimp is as happy as can be. It picks skin parasites off my fish, eliminating the need for medication, and is a riot to watch eat as it frantically runs around the tank gathering up food.
Mark A South Orange , NJ
This is one of the more fun-to-watch shrimp varieties, although you can't have two unless they are a mated pair. It is possible that they could lose a limb or two during molting, but if your water quality is good with the proper supplements, they will regenerate eventually.
Brad C Lowell , MA
This is a great shrimp. It seems aggressive, but can't do too much harm. Very easy to care for.
Vin T Boston , MA
A very cool shrimp! Drop pellets on the bottom and its feeding instincts are just fascinating. The molting process is even better. Worth every dollar!
Sherry K Hillsdale , WY
Our CBS molted in the shipping bag and has curly whiskers from the experiance, but I expect him to straighten out when he molts again. This shrimp is bolder than the peppermints in the same tank. He's often right out in front of the rocks. He really likes frozen foods like Prime reef that will sink to the bottom.
Shawnna T Venice , FL
A neat addition to any tank! He is very good with our Hermit Crabs and Dwarf Seahorses. He is very funny and he likes to sit ander our filter and poke the Hermit Crabs that go by- I guess that's why he's called a Boxing Shrimp! He eats our flake fish food and likes to hide in our Siver Branch Pumping Xenia. We watch him for hours!
Zach P Surprise , AZ
Very beautiful shrimp that are fun to watch.
Courtney M Marysville , WA
This was the first addition to my 125 gallon FOWLR and he's been pretty entertaining since day one. Once my porcupine puffer was put in the tank, I was sure Little Big Arms, the shrimp, would be a snack but he held his own against the 4 inch puffer and wiggled his antennas in the puffer's face to ward him off. The puffer still looks at him sometimes but Little Big Arms just waves his antennas at him and the puffer swims away. He's always been a hider, but he'll come out every once in a while and has been seen stealing food out of my clownfish's mouth, which was quite amusing.
Amanda F Castalia , NC
I would recommend this shrimp to people with fish only tanks, and large fish at that. I got this shrimp to clean up the food left by my messy fish, instead it started eating my hermits! It seems particularly fond of my Scarlet Reef Hermits. So far my Dwarf Zebra Hermits and various snails have survived. Purchase with caution! I donated my to a pet store.
Josh G San Leandro , CA
If you have fish that are used to cleaner shrimps, just be careful. They will come right up to this guy and he'll nip off their fins with those mighty claws! Happened to my Flame Angelfish AND my Regal Tang. So, just use caution!
Gregg L. Friedman Miami , FL
Beautiful Coral Branded Shrimp. My shrimp is very healthy and doing well. He does a great job cleaning detritus from the bottom of the aquarium. He gets along well with the fish too. Thanks for a great addition to my tank. By Gregg L. Friedman MD, Miami, Florida
Alex W Glendale , AZ
Fun to watch sometimes is a bit rude to other fish but is other wise pretty peaceful him and my blue tang like to hang out together
1-14 of 14 testimonials