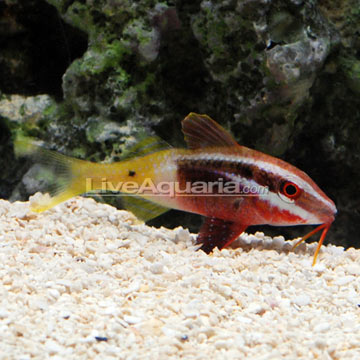 The Bicolor Goatfish has a burgundy anterior and yellow posterior divided by a white band. There is a black dot on the posterior portion and a pair of white stripes on the anterior portion giving it the name Dash and Dot Goatfish. Both head and tail also have blue markings. Goatfish are relatively new to the hobby, but fast growing in popularity. If you’re looking for the unexpected, consider the Bicolor Goatfish. These hardy characters introduce energetic activity to the aquarium bottom as they actively patrol the sand bed to satisfy their appetites, making them a unique addition to your aquarium.

An established 125 gallon or larger aquarium with plenty of swimming room is recommended, and it needs non-aggressive tank mates. The bottom of the aquarium should have a moderate substrate layer so the Bicolor Goatfish may use its barbels to sift through the substrate in search of food (invertebrates, small crustaceans, worms). Because it eats the invertebrates, the nitrogen load capacity of the sand will be reduced and it will be well-oxygenated due to the sifting. Goatfish prefer to be housed with less aggressive tank mates.

The diet should consist of fresh or frozen meaty preparations. Goatfish have a high metabolism and should be fed four to five times daily.

Write a Testimonial | Ask Customer Service
Damon K Carbondale , IL
My Bicolor Goatfish is great. Someone told me this is the fish to get to eliminate bristle worms, but I had no idea! Mine will search the bottom of my 80-gallon reef continually eating them! It can be bullied, though, so provide plenty of hiding places. I don't add food specifically for it, as it relishes anything that hits the bottom. This is a great fish.
Elliot H Rockford , IL
For the littlest fish in my predator tank, he cetainly dominates it at feeding time. Steals food right out of the much larger tuskfish's mouth! Very quick and acrobatic too!
Julie K Scottsdale , AZ
I love this fish .. This was the first one Hubby demanded I get ...I have had my fish in there 1 yr and so he is a new Addison to my tank he made himself at home and is a fun fish always in the spot light ... THanks foster and smith again
1-3 of 3 testimonials