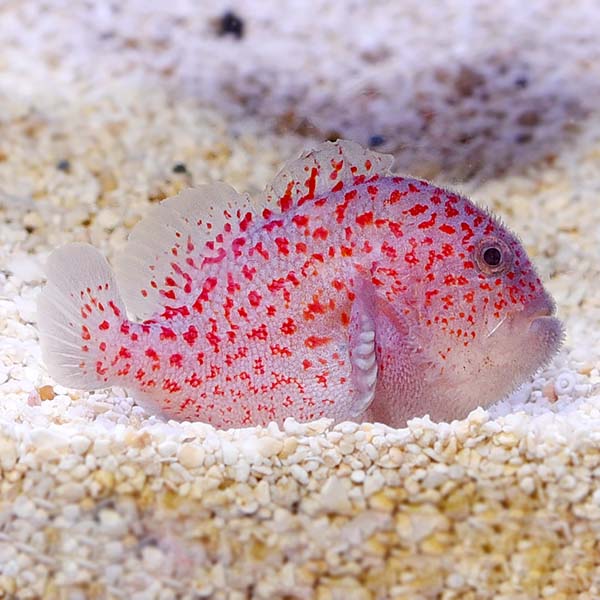 The Madagascar Coral Croucher Goby is an ornate bottom-dwelling fish sporting lovely pink/red coloration and speckled markings. It is a fascinating fish often found in and about both hard and soft corals. With numerous and descriptive common names such as Gumdrop Coral Croucher, Velvetfish, and Velvet Goby, it is not too difficult to surmise the general appearance and behavior of this fish. The Madagascar Coral Croucher Goby possesses a compact, gumdrop-like body that is vertically compressed, allowing it to navigate tight spaces between reef rubble and coral branches. Its entire body is covered with fine "hairs" that give it a fuzzy or velvet-like appearance.

The Madagascar Coral Croucher Goby does best when housed in an established aquarium of at least 10 gallons in size, aquascaped with a generous amount of live rock, rubble and preferably branching corals or similar decorations. It will rarely demonstrate aggression towards other fish but is known to squabble with its own kind in smaller aquariums. Therefore, it is best to keep the Madagascar Coral Croucher Goby singly, as a mated/bonded pair, or with other docile species.

It is not uncommon for the Madagascar Coral Croucher Goby to spawn in the home aquarium. Caution should be exercised if your aquarium contains Acropora or similar SPS corals as the Madagascar Coral Croucher will lay eggs on the underside of coral branches, causing tissue recession in that area of the coral. However, under good conditions, the coral will regenerate the patch of lost tissue.

The diet of the Madagascar Coral Croucher Goby should consist of a variety of brine shrimp, frozen mysis shrimp, chopped table shrimp, and frozen food preparations for carnivores. If housed in a reef aquarium with live branching corals, the Madagascar Coral Croucher Goby needs to be target fed once a day with a syringe or feeding tool. If housed in an aquarium without substrate, it will require several feedings per day.