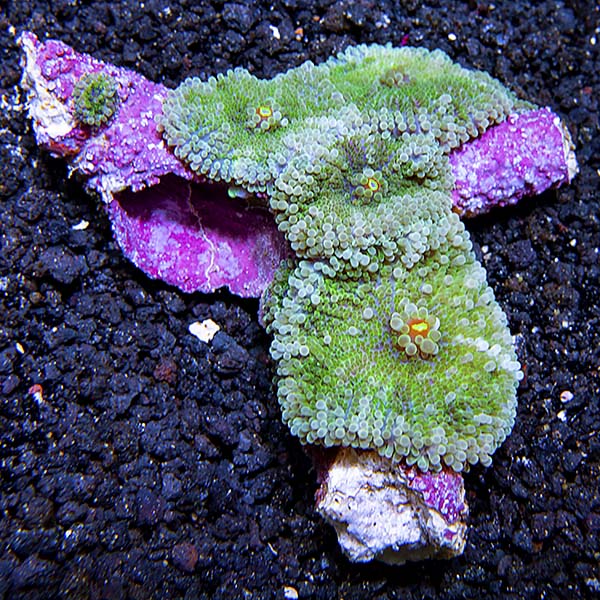 The Green Ricordea Mushroom Coral, is a member of the order Corallimorpharia (Stephenson, 1937), and has short, club, or berry-shaped tentacles. It shares some similarities to stony corals and is also termed a Disc Anemone. It is found in a variety of color forms, but green is the most common.

It requires a medium to high light level, but metal halide lighting may be too bright. It prefers a low water movement within the aquarium, and it may not be as hardy as some of the other mushroom corals. It is considered semi-aggressive and requires adequate space between itself and other corals. It reproduces by longitudinal fission.

The symbiotic algae zooxanthellae hosted within it provides the majority of its nutritional requirements from the light driven process of photosynthesis. It also eats plankton and smaller invertebrates such as crustaceans.

It ships as several individual mushrooms attached to one rock.

Write a Testimonial | Ask Customer Service
Jonathan Dunder Milwaukee , WI
This species is very easy to care for and great for beginners! It was the first coral I put in my saltwater tank and it is already growing!
1-1 of 1 testimonials