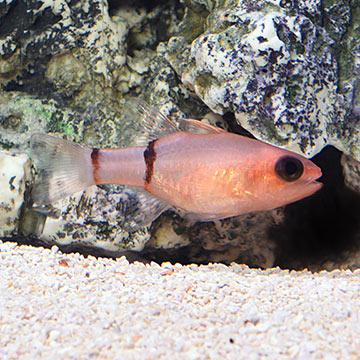 The Red Belted Cardinalfish is a fiery, eye-catching fish that can range in coloration from red/orange to red/pink with a glassy, slightly transparent appearance. As its common name suggests, (Apogon townsendi) sports vertical bars along its caudal peduncal, giving it a dapper, belted appearance. This peaceful cardinalfish can be found from Southern Florida to the Bahamas and Northern South America in the Caribbean where they can be frequently seen alone or in groups, in caves or hole often seen hovering in the spines of long-spined urchins.

A 30 gallon or larger aquarium with an ample amount of live rock provides a great habitat. Aquascape to create caves and crevices for a more natural environment. House the Red Belted Cardinalfish with peaceful tank mates as it is a slow and methodical swimmer easily stressed by more active faster-swimming fish. The Red Belted Cardinalfish can pair off with a mate and has been known to breed in the aquarium. Like other Apogon species, it is a mouth-brooder. As its large eyes suggests, the Red Belted Cardinalfish is primarily nocturnal in nature and does well in dimly-lit setups. You can observe it at night using a red light.

The Red Belted Cardinalfish requires a well-balanced and vitamin-enriched diet of meaty foods such as feeder shrimp, mysis shrimp, bloodworms, and depending on its size, live feeder fish.