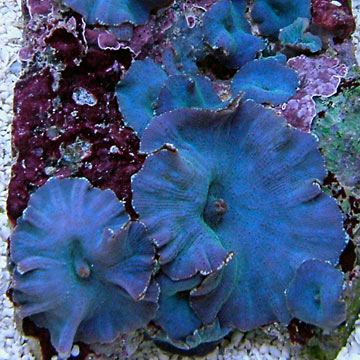 The Actinodiscus Mushrooms are also referred to as Mushroom Anemones and Disc Anemones. They were previously in a genus called Discosoma. These invertebrates display a wide variety of colors, textures, and patterns. Some are solid colors, such as the blue specimen pictured above, whereas, others are striped or spotted. The taxonomy of the various species is in a state of flux, and will probably continue to change.

They are hardy and moderately easy to maintain, and under the right conditions, will multiply and spread very rapidly. In general, they need a medium light level, and should be placed lower in the tank if the light intensity is high. The Actinodiscus Mushrooms prefer a low to medium water flow within the aquarium, although different species may have different requirements. They are semi-aggressive and require adequate space between themselves and other corals and sessile invertebrates.

Item numbers 77208, 77209 and 77210 ship as several small chips of rock, each containing one mushroom, glued to one larger rock. Item number 84237 ships as a single Polyp. These mushrooms do require a few days after acclimation to fully open.

Write a Testimonial | Ask Customer Service
Coral Lover Charlotte , NC
I bought this mushroom,and I am a very pleased customer.The mushroom arrived perfect with 6 on one rock,and they are doing well.They opened up fully in 2 days.I have 29 gal Biocube.
1-1 of 1 testimonials