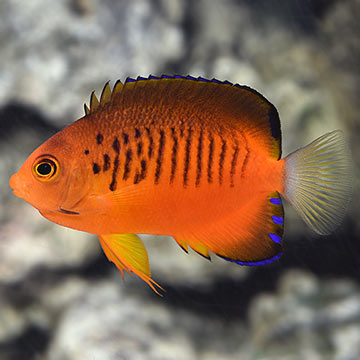 The True Shepard’s Angelfish (Centropyge shepardi), also known as the Mango Angelfish, is a dwarf marine angelfish that comes from corals reefs in remote areas of the Western Pacific such as the Mariana Islands, Ogasawara and occasionally the Izu Islands of Japan.

True Shepard’s Angelfish can grow to 4” or more so an established 70 gallon aquarium or large setup aquascaped with generous amounts of live rock with plenty of open spaces to swim, is recommended.