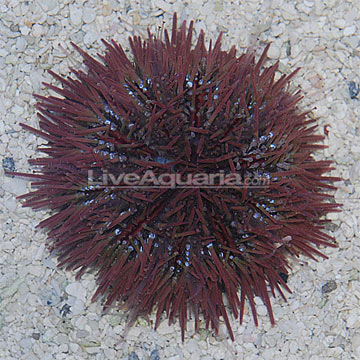 The Pincushion Urchin has an oval to round body covered with hundreds of uniform spines. Its color can range from red to purple to white and blue.

It requires ample hiding places and sufficient room in which to forage in the home aquarium. It generally hides in caves during the day, though it may make a burrow in thick substrates. At night, it comes out to graze on algae, moving about by its suctorial podia that are aligned in five doubled rows. The aquarium should include large amounts of live rock on which it can graze. It may also prey on some of the sessile invertebrates in the reef system. Rock formations need to be stable and able to withstand the movement of the Urchin wedging itself in crevices. It is generally solitary, but will tolerate others of its own kind. It is sensitive to high levels of copper-based medications and will not tolerate high nitrates. Poor water quality will cause it to lose its spines.

It is extremely difficult to breed in an aquarium, with no distinguishing characteristics to help differentiate it from its mate.

If there is insufficient algae for it to graze on, the diet should be supplemented with dried seaweed.

Write a Testimonial | Ask Customer Service
Justin K Grand Junction , CO
We purchased a Pincushion Urchin and did not expect to see it very much. It is probably the most visable addition to our tank. Although we have about 70 pounds of live rock, this urchin prefers to be on top of the rock, on the glass, or on the intake for the protein skimmer. This is my first tank and this urchin was very very easy. The first 3 weeks we added green seaweed and put it under the rock. This Urchin is a must have!
Keith B Villa Park , IL
I purchased one of these urchins and the little thing is awesome, constantly moving around exploring my tank. It doesn't bother any of it's tank mates, and my valentini puffer has yet to mess with it. It is a great clean up crew for predatory tanks.
Neal L Hanover , MD
Had my guy for over a year and really enjoyed him. He gets along with almost everyone else in the tank including my long spine urchin. The only issue is with snails. He likes to pick up bits of debris in the tank and carry it around in his spines, for camoflage I suppose. And he will sometimes pick up a snail and carry that fellow around for a few days. I always rescue the snail, although I'm not sure it's really necessary. He spends most of the day roving around on the glass and rocks eating algae. I've seen him brush his spines up against fleshy corals with no apparent harm done. You can even pick him up bare handed if you are really gentle - the spines are not that sharp
Remy F Hayward , CA
The Urchin I received is a nice deep dark purple. Roves around the tank all day. Usually on the glass the filters or the rocks. Great cleaner and no other fish seem to bother him. I would recommend one in any tank.
Julia C Bloomington , MN
I got one of these guys a while back and love him! He's huge and is always where I can see him. He is constantly munching on algae. Amazing addition to the tank!
1-5 of 5 testimonials