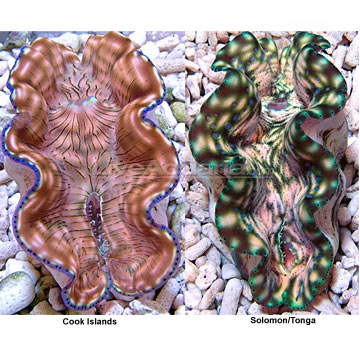 Tridacna derasa is also referred to as the Southern Giant Clam or Smooth Giant Clam, and is the second largest of all the Tridacna spp., reaching a size of 24" in the wild. Unlike most other Tridacna spp. that have a large byssal opening, Derasa Clams have a narrow gap on the underside of their thick, smooth shell. They can easily be confused with their close relative Tridacna gigas, especially when they are very small in size. T. derasa can be identified by having six to seven vertical folds in their shell which they can close completely, where T. gigas has only four or five vertical folds, and is unable to completely close their hinged shell.

Tridacna derasa have a broad range in the wild and are found in the Indo-Pacific, Central Pacific and South Pacific as well as the Coral Sea. They occupy outer reef habitats on both sandy and hard packed substrates, and can be found either solitary or in small aggregations at depths ranging from 10 to 60 feet. All Derasa Clams entering the aquarium trade are cultured in the Central Pacific and South Pacific Ocean. Although they can be found in a variety of colorations and patterns in the wild, the ones aquacultured for the aquarium trade are primarily gold, brown, orange, and yellow, with vibrant blue or green trim edging that surrounds the mantle.

T. derasa will arrive unattached to any rock or substrate, and prefer to be placed in the sand or in a recess of a rock, as they do not attach as firmly to the substrate or rockwork like most other members of the genus. In the home aquarium, Derasa Clams require moderate to intense lighting to thrive as they contain the symbiotic algae called zooxanthellae, and receive the majority of their nutrition from the light through photosynthesis. Smaller T. derasa that are 2" or less in size are much more sensitive to very intense lighting as their membrane is much thinner than larger specimens.

For this reason care should be taken to properly photo-adapt them to the existing reef aquarium lighting in a similar manner to newly introduced stony and soft corals. When adapting a new Derasa Clam to very intense lighting, it is ideal to set them on a small rock or in a plastic dish with coarse substrate at the bottom of the aquarium. Over time, the clam can then be slowly moved up higher in the aquarium. When maintained in the proper environment, smaller Derasa Clams can double or triple their size in less than a year.

Tridacna clams are also filter feeders and constantly filter the water for small particulates. Derasa Clams larger than 2" do not require supplemental feedings, but smaller T. derasa that are less than 2" should be fed a phytoplankton or greenwater supplement several times per week if maintained in a nutrient poor reef aquarium.

Tridacna derasa are the hardiest and most adaptable of all the Tridacna spp., and require moderate to intense lighting and good water flow in the home aquarium. Proper water chemistry is very important, and they will thrive when calcium levels of 380- 450 mg/L, alkalinity level of 8-11 dKH, and magnesium level of 1280-1350 ppm are maintained.

Write a Testimonial | Ask Customer Service
C. Furtado N.B. , MA
My derasa clam is one of my favorite specimens in my reef aquarium. It adds color and beauty to the tank. It is a quick grower though, and proper placement is needed in order to allow it to have room to grow. I recommend this species for its realitive ease of care and its beauty.
1-1 of 1 testimonials