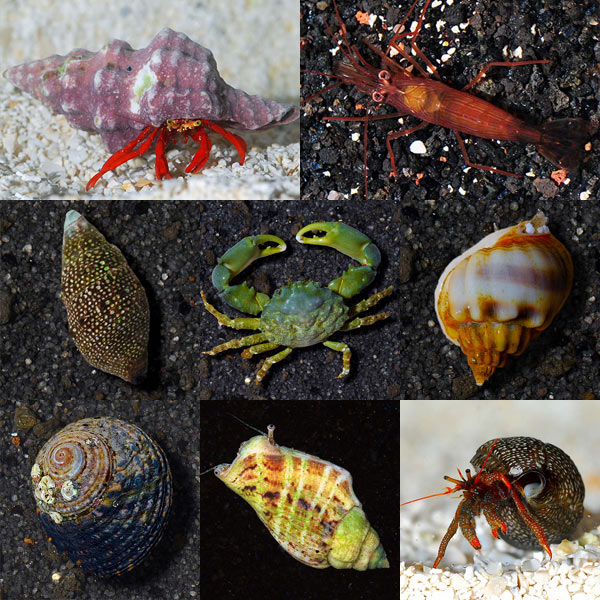 Algae Attack Packs are designed to establish a natural means of controlling algae growth, along with maintaining crystal-clear water in marine aquariums. The number of cleaners in each package is based on our years of experience, and is tailored to provide enough cleaning power for the size of aquarium that you are maintaining.

Algae Attack Pack is a formidable offense that will put algae on the run. Filamentous (hair algae) is mowed down by the hermit crabs, and film algae is wiped away by the snails. All of the members of this pack will also attack various microalgae (including cyanobacteria) that may be found in the aquarium.

Write a Testimonial | Ask Customer Service
Alan W Silverthorne , CO
I recently introduced the algae attack pack to my 150-gallon tank and was very impressed with the results. I was having a hard time with a rust-colored algae in my tank and the algae attack pack did the trick. Those little guys have been going to town on the stuff for a couple of weeks now and I have got to say it's pretty cool!
Tom Michigan City , IN
I just started a 56 gal aquarium and encountered red algae every where. Ordered the Algae Attack Pack Standard and in 3 days it was all gone. The various sizes allows these guys to get into all the small spaces... and the tank looks great now! This was my first mail purchase and I was nervous, but everything survived and is doing well.
Yasmine Phoenix , AZ
I ordered this for my 30 gallon Nanocube. It is in the process of cycling and I got a nasty algae bloom. Not only is this cleaner pack super awesome and get rid of all of the algae but it also did not cause any nitrate peaks which I was worried about. You won't be disappointed with this purchase!
Kevin M Hewitt , NJ
After introducing the Attack Pack, with in one week the difference is amazing. Impressed with the snails. The bottom inch of my 125gal, the algae could only be removed with a razor, they followed it like a trail and it was gone in 2 days, they even eat the algae from the scratches in your tank making glass look new,,,I also can leave lights on longer,,,its a win win,a natural cost effective way to clean tank,,,,and the crabs,,,,anywhere you look,,,,there is activity. I couldn't be more satisfied
Randall D Vancover , WA
We put the 30 gallon Attack Pack in our 50 gallon. Our tank was thick with algae. We cleaned it once a month, but in 30 days it was about 1/8" everywhere. The Attack Pack along with an Emerald Mithrax Crab took less than 2 weeks to completely remove all traces of algae. 3 months later and still no algae. Now we are supplementing with food so our eaters won't starve. I can't believe how well this has worked on our algae. Our filter is staying cleaner longer as well. I think this is the single most important thing you can do for the well being of your saltwater tank.
1-5 of 5 testimonials