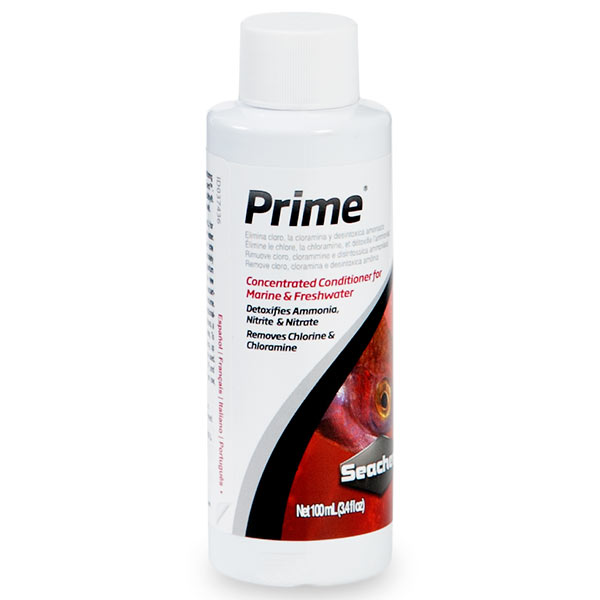 No other aquarium water-conditioning product is required to make tap water safe. Prime removes chlorine and chloramine (even in high chloramine levels), and detoxifies ammonia, nitrite, and nitrate. Provides essential ions and stimulates natural slime coat. Prime also detoxifies any heavy metals found in the tap water at typical concentration levels. When used during cycling, Prime enhances nitrate removal and does not cause a pH drop or overactivate protein skimmers. Great for setting up new aquariums, or when adding or changing water, or to remove nitrate.

Directions
Use 1 mL for each 10 US gallons of new water. May be added to aquarium directly, but better if added to new water first. If adding directly to aquarium, base dose on aquarium volume. Sulfur odor is normal. For exceptionally high chloramine concentrations, a double dose may be used safely. To detoxify nitrite in an emergency, up to 5 times normal dose may be used. If temperature is > 30 °C (86 °F) and chlorine or ammonia levels are low, use a half dose.

General Information
Prime is the complete and concentrated conditioner for both fresh and saltwater. Prime removes chlorine, chloramine and detoxifies ammonia. Prime converts ammonia into a safe, non-toxic form that is readily removed by the tank’s biofilter. Prime may be used during tank cycling to alleviate ammonia/nitrite toxicity. Prime detoxifies nitrite and nitrate, allowing the biofilter to more efficiently remove them. It will also detoxify any heavy metals found in the tap water at typical concentration levels. Prime® is non-acidic and will not impact pH. Prime will not overactivate skimmers. Use at start-up and whenever adding or replacing water.

When transporting or quarantining fish, use Seachem StressGuard. When adding new fish, use Stability. Both are ideal for use with Prime.

Nearly all companies manufacture a product that removes chlorine. None of those, however, can compare in quality, concentration, or effectiveness to Seachem’s flagship product: Prime. Prime is the second most concentrated dechlorinator on the market after our own aquavitro alpha. A single 100 mL bottle will treat 1,000 US gallons of tap water. Prime will remove both chlorine and chloramines from municipal water supplies.

Prime also contains a binder which renders ammonia, nitrite, and nitrate non-toxic. It is very important to understand how those two functions work together. All dechlorinators operate through a chemical process known as reduction. In this process, toxic dissolved chlorine gas (Cl2) is converted into non-toxic chloride ions (Cl-). The reduction process also breaks the bonds between chlorine and nitrogen atoms in the chloramine molecule (NH2Cl), freeing the chlorine atoms and replacing them with hydrogen (H) to create ammonia (NH3).

Typically, dechlorinators stop there, leaving an aquarium full of toxic ammonia! Seachem takes the necessary next step by including an ammonia binder to detoxify the ammonia produced in the reduction process.

Be very careful when purchasing water conditioners. If your municipality includes chloramines in the water supplies, a standard sodium thiosulfate dechlorinator is not enough. Prime promotes the natural production and restoration of the slime coat rather than relying on artificial or non-native slime compounds. A further bonus for the reef hobbyist - Prime will not overactivate protein skimmers.

Q: I think that my Prime might be old because it smells like it went bad.
A: Prime has a very distinct odor that is similar to sulfur, which is completely normal. Also, the presence of small black specks is normal.

Q: I am using Prime to control ammonia but my test kit says it is not doing anything, in fact it looks like it added ammonia! What is going on?
A: A Nessler based kit will not read ammonia properly if you are using Prime. It will look "off scale", sort of a muddy brown (incidentally a Nessler kit will not work with any other products similar to Prime). A salicylate based kit can be used, but with caution. Under the conditions of a salicylate kit the ammonia-Prime complex will be broken down eventually giving a false reading of ammonia (same as with other products like Prime), so the key with a salicylate kit is to take the reading right away.

However, the best solution is to use Seachem MultiTest Ammonia kit; it uses a gas exchange sensor system, which is not affected by the presence of Prime or other similar products. It also has the added advantage that it can detect the more dangerous free ammonia and distinguishes it from total ammonia (total ammonia is both free ammonia and non-toxic ionized forms of ammonia).

Q: How long does Prime stay bound to the ammonia, nitrite, and nitrates?
A: Prime will bind up those compounds for up to 48 hours. If they are still present after that time frame, they are released back into the water, unless Prime is re-dosed accordingly. Also, if your ammonia or nitrite levels are increasing within a 24-hour period, Prime can be re-dosed every 24 hours.

For over three decades, Seachem has been a company rooted in sound science. Their experience in the hobby and an educated staff of chemists and biologists are part of the package when you purchase Seachem products. Seachem remains as one of the few surviving independent and privately owned pet care companies. Seachem is owned and operated by hobbyists. All Seachem employees are hobbyists who maintain aquariums at home and at the office. Seachem itself was started because one such hobbyist found the available solutions to aquarists' problems wanting. This resulted in Seachem's very first product: Cupraplex™ (today known as Cupramine™. Over thirty years later Seachem is still approaching old problems in a new way that outperform the already high standards we've set with the Seachem line. Seachem is committed to maintaining that optimization.