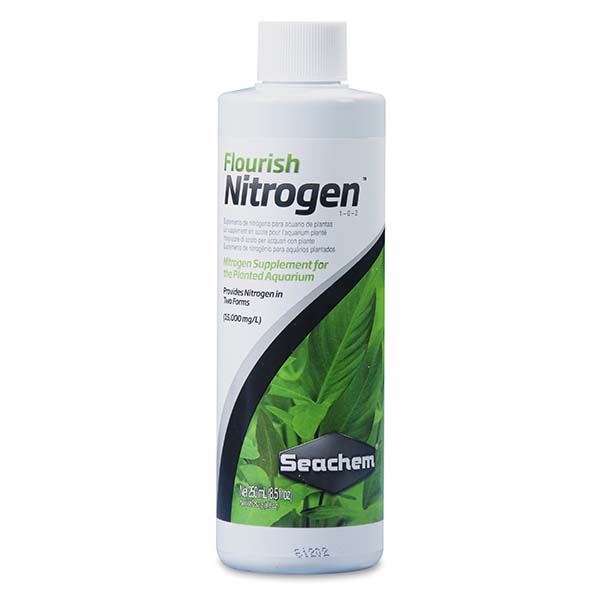 Supplies nitrogen, one of the three main macronutrients required by plants, in both the nitrate form and the plant-preferred ammonium form. Does not release ammonia. 500 ml treats up to 10,000 gallons.

Recommended Dosage:
Beginner: Use 2.5 mL (half a cap) for each 160 L (40 gallons*) twice a week or as needed in response to signs of nitrogen deficiency (e.g., stunted growth, chlorosis). For smaller doses, please note that each cap thread is approximately 1 mL.

Expert: The beginner dose raises nitrogen by the same degree that 1 mg/L nitrate would. This dose is sufficient to provide approximately 4 g of growth (dry) or about 20 g (hydrated) over a 1 month period (assuming all other necessary nutrients are provided). For increased growth, use proportionately more. To target a specific nitrogen increase, dose according to the following formula: 0.25vn=m, where v= volume of tank in gallons*, n=desired nitrogen increase (if using a "nitrate equivalent" value for "n" then use a factor of 0.05 instead of 0.25 in the formula) and m=volume of product to use in mL. For example, to raise 20 gallons* by 0.20 mg/L nitrogen, you would use: 0.25*20*0.20=1 mL.

Because one-half of the nitrogen in Flourish Nitrogen™ is from nitrate you can get a reasonable estimate of nitrogen levels by doubling a nitrate reading.