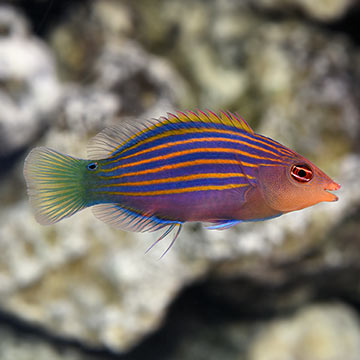 The Six Line Wrasse is both beautiful and active. With its six distinct, horizontal blue lines overlaid against an orange body, this member of the Labridae family brings a zip of color to any marine reef aquarium. This is especially true when a courting male Six Line Wrasse displays an increased color intensity. However, it is the active darting amongst rock outcroppings and corals that most attracts the Six Line Wrasse to any onlooker.

Though generally peaceful, the Six Line Wrasse may act aggressively towards peaceful Wrasses and other easily-intimidated fish, especially if inadequately fed or if its habitat is void of places in which it can hide.

Write a Testimonial | Ask Customer Service
Hank S Milwaukee , WI
My Six Line Wrasse is awesome. It weaves in and out of cracks and crevices and picks at algae all day long. Beautiful coloration! Great addition to any reef tank.
Evan M Dillon , CO
This is a very attractive and energetic fish. I have one in my 20 gallon nano. It is constantly looking for food. Mine even eats flake food.
Robert M Toms River , NJ
My Wrasse arrived in great condition. He took his shipping very well and ate the first night. I enjoy watching this fish swim between the rocks with good speed. Great wrasse for the price!
Carl B Canton , OH
Great fish that loves to swim in and out of live rock. I would add it as your last fish to the tank because they like to attack newcomers. Eats almost any type of food.
Andy S Seattle , WA
Doesn't keep to a single spot in the tank, but travels all over! Sometimes aggressively intimidates other tankmates who are docile or smaller. Eats well and seems very hardy. Beautiful colorations and energetic personality makes this a must-have addition to any reef tank; large or small!
Keith Moss Beach , CA

This fish is an awesome addition to any reef or fish-only tank. Mine is very spunky, he is active all day, checking everything out. He eats anything I feed him. He's great to have, I'd recommend him to anyone. He's one of the best little fish I've ever bought!
Houston B Nashville , TN
The Six Line Wrasse is probably my favorite fish ever. I will include one in every saltwater aquarium that is peaceful that I ever own. My six line is my absolute favorite to watch in my aquarium. He loves to dodge in and out of my rock work, and loves to peek out at you through crevices. He brings so much joy and activity to my aquarium. He is also the most peaceful in the aquarium, with breaking up any "disagreements" that might start between to other fish. I would highly, highly recommend this fish!
Kelly M Great Falls , MT
Cool fish! Very active and hardy. Eats bristleworms and other pests in my 55 gallon reef aquarium.
Trevor W Council , ID
This fish is great, I have had him for 6 months now. He does not mind his companions: 2 Hippo Tangs, 2 Percula Clowns, a Chromis and a Pajama Cardinal. I had a shrimp but he ate it! I do not recommend this fish to people who have shrimp, but I do recommend this fish to anyone without them. He will eat everything we feed him. He loves to weave in and out of the rocks. Not one thing I can complain about. I truly love this little fish.
Mike V Horseheads , NY
My Six-Line is a very active and fun little fish to watch! Beautiful colors and very energetic. He is like the nosey neighbor down the street who know everything about everyone. The first to check every nook and cranny of anything new to the tank. Eats everything I give him and gets along with all my other fish. An excellent, inexpensive way to add character, activity, and color to any tank. Highly recommended!! I
Kyle S Valparaiso , IN
I consider the Six Line Wrasse an essential member of any reef aquarium. They are rather sleek and are extremely colorful. They have interesting personalities; mine weaves in and out of my liverock searching for bits of food. It can also hold its own against a few of my pesky damsels, but I would definitely consider it a peaceful addition vital to any reef system.
Adam B Hopewell , PA
Love this fish. Excellent with my Hippo Tang, Clowns, and Bicolor angel. Even picks off parasites on other fish! Will always have one of these....
Austin G Mountain Lakes , VT
Be sure you have a closed lid on the tank. Mine died because it jumped out of the tank.
Howard R Overton , NE
Love the fish. Only problem was be careful adding peppermint shrimp or camel shrimp my wrasse has a a goal in life now annette is to kill all the shrimp in my tank. and he won't rest till it's done. also my singapore angel loves to help him. all in all still a good fish. but I'm going to stick with the scarlet reef shrimp seems though no other fish bothers them.
Jones Leonardtown , MD
Beautiful fish, fun to watch, but mine has to go. It's systematically exterminating my hermit crabs. I read that it might happen but so many people seem to have peaceful wrasses. I finally caught mine in the act after about 10 dead crabs had been found with the soft tails chewed off. Otherwise, it's a very cool fish. (Fewer dead crabs seem to pop up when I feed mysis shrimp more often).
David B Newport Coast , CA
This is a great fish its peaceful gets along with my other fish and has a ton of personality mine loves going through live rock and exploring all the nooks and crannies there are.
Loren L South Otselic , NY
So much fun to watch it zipping around and because of the stripes on its eyes you can watch him seriously looking in the nooks and crannies of the live rocks, as he hovers and stares intently. I have no more bristle worms since he arrived. He is always on the go, hunting. He gets along with my little goby, cardinal, and pair of clowns. Great fish!
Reji T Fairfax , VA
the wrasse arrived in great condition, looks very healthy and adapted very well and quickly. it looks just like the picture. it's not a large fish, but a great addition. i've heard it eats worms. i hope so. his tummy is always full.
Jack A San Francisco , CA
This is a beautiful fish. I had a ich outbreak and he fought threw it great. This fish swims majestically and is a great addition to the tank. He eats everything and is very hardy. He covers himself in a mucous cocoon when he goes to sleep to protect him. This is a great fish to have in a 36 gallon tank.
Yan V Frisco , TX
I keep reading that the six line is reef safe. Keep an eye on it! Added one a week ago, and he is eating tentacles off my duncan, wall hamer and toxic eye purple torch corals.
Justin K Minneapolis , MN
A brave and beautiful reef dweller. We are very surprised and satisfied with this guy. I have never had a wrasse before, but am very pleased with his disposition and coloration. If you are looking for a nice reef addition that wont be hiding in the shadows, this is a nice choice.
David S Charleston , SC
This is an awesome fish for a reef tank. Great personality, and keeps bristleworm population under control. Needs live rock to feed on.
John B Plymouth , MN
One of my favorites. It is a great addition to any tank. Very peaceful so get it first when setting up a new tank.
1-23 of 23 testimonials