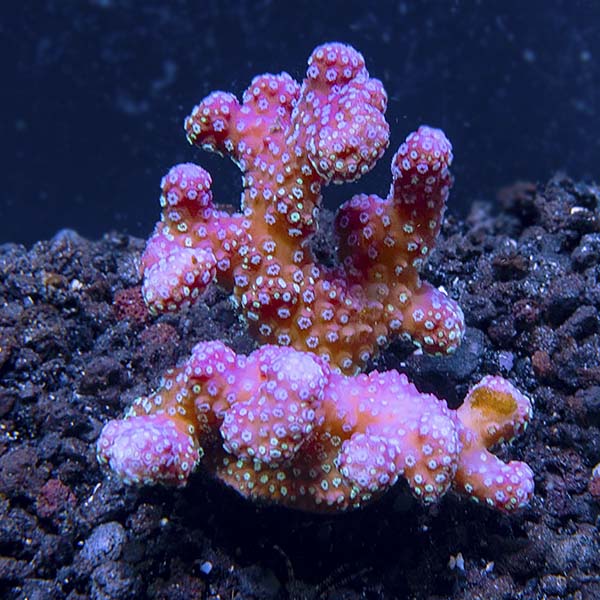 The Stellar Stylophora Coral is a small polyp stony (SPS) coral commonly referred to as Cat's Paw, Club Finger, Cluster or Brush coral. It has rounded branches with blunt ends that differentiate it from other closely related SPS corals. You will want to add this beauty to your collection with its highly variable base coloration ranging from pink to intense red with hues of purple, fuchsia and peach. The polyps will be shimmering with electric blue to green polyps. We originally obtained this strain of Stylophora from Julian Sprung’s collection in 2012.

They will thrive in a variety of lighting conditions, ranging from power compacts, T-5s, powerful LEDs and up to the more intense metal halides. Stylophora Corals satisfy the majority of their nutritional requirements by means of photosynthetic, symbiotic zooxanthellae algae hosted within its body. While it may not require additional food to maintain its health in the reef aquarium, these frags will feed on micro-plankton or foods designed for filter-feeding invertebrates.

The Aquacultured Stellar Stylophora coral is attached to a plastic plug and can be easily placed in holes or between the rockwork of the reef aquarium.