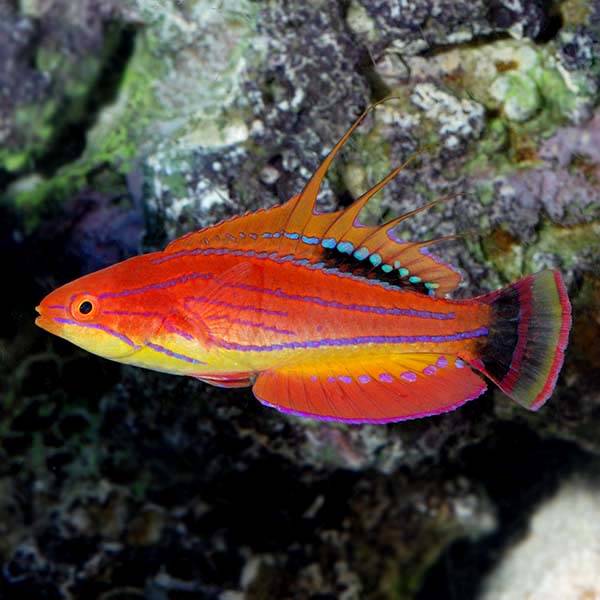 The Carpenter's Flasher Wrasse requires a 55 gallon or larger aquarium with a tight-fitting lid since it is a jumper. A grouping is acceptable and often recommended, since the females will encourage the male to perform colorful displays. The females should be introduced into the tank first. It is often harassed by other fish so the Carpenter's Flasher Wrasse should be the first species introduced into the aquarium. It is best to keep it with peaceful tank mates.

Write a Testimonial | Ask Customer Service
S. Otteni Clinton , UT
I love this fish! When I first put him in my tank he was kind of shy, but as time went on he became more friendly with me. He is great with the other fish. One word of caution is he is a jumper. I had to be careful when I went to feed him because he would try and jump out to get the food, but that kind of made him fun.
Marie C Oakley , CA
I received this beautiful boy and was so pleasantly surprised by his size and color. He has taken up residence in a cove in the middle of our 110 gal tank. He ate right away and comes out of his hiding place quite often to check to see what is going on. So far, he only has a few chromies, some cardinals, a couple of skunk shrimp, an anemone and a percula clown to keep him company. I've gotten all my fish from F&S and won't hesitate to order more.
1-2 of 2 testimonials