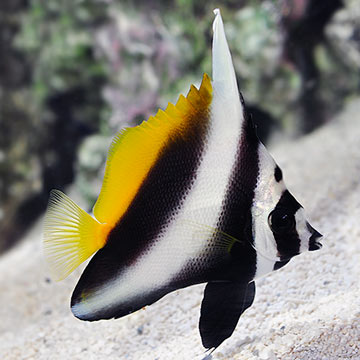 The Singular Bannerfish is distinguished from other Bannerfish by specific banding patterns. The Singular Bannerfish has a white ring around the mouth followed by a sequence of black bands including a complete ocular band that originates above and extending beyond the eye down to its "chin." The following black, mid-body band is located in front of the dorsal fin and the final black band transitions seamlessly to a bold, canary yellow coloration that follows the dorsal ridge and caudal fin.