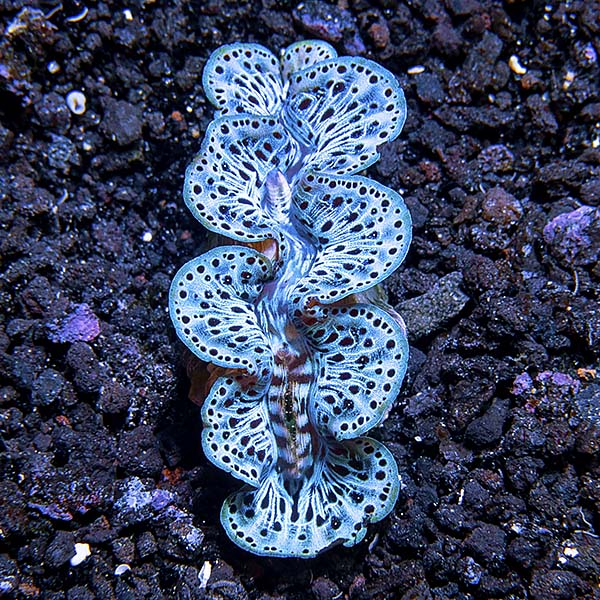 The Maxima Clam is also known as the Small Giant Clam and is one of the most widely recognized species of the giant clams. The beauty of its mantle with its rich variety of patterns and vivid colorations makes for a spectacular display in reef aquariums that are illuminated properly. Maxima Clams are known to live together in great congregations, and they can attain a maximum size of 12” in the wild.

The vast majority of Tridacna maxima available in the aquarium trade are cultured on land based clam farms in the Central and South Pacific. Maxima Clams are found in an endless variety of colors and patterns, and these clams are graded for size, their intensity of coloration, and how complex their patterns are, and then priced accordingly. Larger clams that have the most intense coloration and intricate patterns are much more expensive.

In the home aquarium, the Maxima Clams require intense lighting to thrive as they contain the symbiotic algae called zooxanthellae, and receive the majority of their nutrition from the light through photosynthesis. Smaller T. maxima that are 2” or less in size are much more sensitive to very intense lighting as their membrane is much thinner than larger specimens. For this reason care should be taken to properly photo-adapt them to the existing reef aquarium lighting in a similar manner to newly introduced stony and soft corals. When adapting a new Maxima Clam to very intense lighting, it is ideal to set them on a small rock or in a plastic dish with coarse substrate at the bottom of the aquarium. Over time the clam can then be slowly moved up higher in the aquarium.

Tridacna clams are also filter feeders and constantly filter the water for small particulates. Maxima Clams larger than 2” do not require supplemental feedings, but smaller T. maxima that are less than 2” should be fed a phytoplankton or greenwater supplement several times per week if maintained in a nutrient poor reef aquarium.

Write a Testimonial | Ask Customer Service
Scott R Strongsville , OH
I purchased 2. The normal blue had absolutely no blue, and the ultra blue had less blue than the first grade. Stick with WYSIWYG
1-1 of 1 testimonials