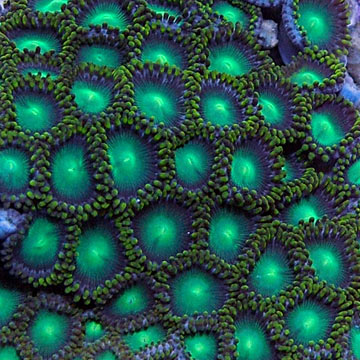 The Colony Polyp, Radioactive Dragon Eyes glow with a radioactive green that is sure to have fellow Zoanthid collectors burning green with envy. This amazing color morph exudes a supernatural beauty that immediately elevates your reef aquarium status. Due to its relative ease-of-care, these Colony Polyps make a great choice for avid Zoa collector or budding reef aquarium hobbyist.

Colony Polyps have the ability to sting other polyps or corals. While the sting is not strong, be sure to provide sufficient space between them and other corals because of its semi-aggressive temperament and potential to crowd out neighbors.

It is common to receive a rock that is not completely covered in polyps. However, under the right conditions, they will quickly spread across this and surrounding rocks in the aquarium.