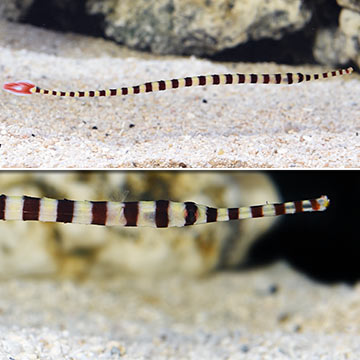 The Banded Pipefish is a type of reef pipefish or flagtail pipefish. This fish is a stronger swimmer than its seahorse cousins and rarely comes into direct contact with the substrate. In the wild, the Banded Pipefish can be found swimming under rocky overhangs, corals, or close to the floor of its reef habitat.

The Banded Pipefish has a long, slender body with a tiny, tubular mouth and an oval, flag-like tail. The body is creamy white with dark red to black vertical rings from the snout to the tail. The tail is bright red with a white margin and dot in the center.

Due to the Banded Pipefish's eating habits we suggest expert's only purchase these fish. It normally prefers to eat only live copepods in a mature reef aquarium with plenty of live rock or macroalgae. An ideal diet to start this fish on is Live Copepods and vitamin-enriched live baby brine shrimp. However, live baby brine should not make up the majority of its diet. Over time, the Banded Pipefish may become accustomed to eating frozen CYCLOP-EEZE®, small Mysis, and Nutramar Ova.

After an elaborate courtship dance, the female will attach her adhesive eggs to the flat area on the underside of the male's trunk. A pair will regularly mate in an aquarium if well-fed. It is not easy to determine gender, but mature males typically have a flattened appearance due to the brood patch, while females are more round.

This social species is best kept in mated pairs or groups of its own kind in an aquarium that is 50 gallons or larger. It may be kept with small, shy fish such as small gobies, seahorses, dragonets, and firefish. Aggressive, territorial, or fast-moving fish do not make good companions. Pipefish will be harmed by anemones and corals with stinging tentacles or corals that are large enough to consume them, such as brain corals. Pipefish can also be harmed by invertebrates such as crabs and large shrimp.