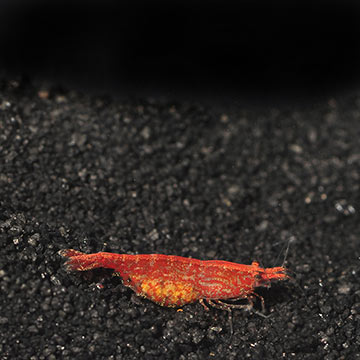 The Red Cherry Shrimp have gained popularity thanks to their large appetite for all kinds of freshwater algae. These highly adaptable shrimp do well in any freshwater aquarium with good filtration and water quality. However, Red Cherry Shrimp will thrive in planted aquariums where food and shelter are abundant. Once established in their new home, these active freshwater shrimp are predominantly red in color with interludes of white. Keep in mind that new arrivals demonstrate varying degrees of "redness." They are often clear in appearance until they have properly acclimated and adjusted to their new environment.

If there is a male and female in your aquarium Red Cherry Shrimp will most likely breed. The female will carry a clutch of yellowish eggs under her tail until they hatch in about 30 days. The newly born shrimp will look like miniature adult shrimp and will eat the same thing as the adults. If breeding these shrimp, it is important to keep them in a breeder aquarium with a sponge filter. This added precaution helps maximize survival of young shrimp.

Red Cherry Shrimp are omnivores that will consume algae, detritus and left over food. If insufficient food is present, supplement with algae tablets or quality flake food or pellets.

Write a Testimonial | Ask Customer Service
Shawana Yokley Greeneville , TN
These little creatures are adorable and fun to watch. My pair has already had their first little shrimp baby. I would recommend these for any aquarium. They are an added bonus to the cleaning crew.
Lord Hexen Middlebury , VT
Only had my shrimp for a day now, but they are definitely adorable and hard workers. All arrived alive despite the temperature of the water. I don't think the hot pack worked, lol.
Amanda L St. Paul , MN
While not as bright as some of the others I've seen, these little guys still stand out. They are adorable and so fun to watch. My cherries love to swim around and defy gravity by climbing on the algea covered walls. Their personality can be described as carefree, easygoing, and active! I love my shrimp!
1-3 of 3 testimonials