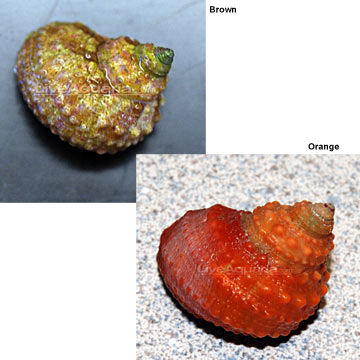 The Chestnut Turbo Snail is an elegant, yet functional, addition to any reef aquarium. Like other snails, Turbo castanae is a powerhouse when it comes to cleaning algae and detritus from your aquarium. And like other members of the Turbinidae family, the Chestnut Turbo Snail boasts the same turbinate, or top-shaped shell. However, it is its well-defined and bead-dotted spirals and soft brown color draped with reddish-brown to cream color patches that really stop any onlooker's eye.

In the wild, Chestnut Turbo Snails are often found in crevices and holes of the reefs, quietly serving as one of nature's more diligent housekeepers. In the home aquarium, the Chestnut Turbo Snail is equally as peaceful and useful. Most prefer ample hiding places and large amounts of room to graze, preferably amongst live rock. They will also feed on the algae covering aquarium glass. Combined with their easy care requirements, the Turbo castanae is ideal for both beginning and advanced reef hobbyists.

Dried seaweed can serve as the perfect dietary supplement for the Chestnut Turbo Snail, especially when natural food sources are insufficient. Keep in mind, however, that adequate calcium levels must be maintained as members of the Turbinidae family use calcium to build their shells. Like many other invertebrates, the Chestnut Turbo is also very sensitive to copper-based medications and prefers low nitrate levels.

It is extremely difficult to breed in an aquarium, especially considering the Chestnut Turbo Snail has no distinguishing characteristics to help differentiate it from its mate.

Write a Testimonial | Ask Customer Service
Timothy M Brackney , PA
I love reef invertebrates, so I have nearly every kind of snail, hermit crab, shrimp, and so forth. Of these all, the orange variety of the chestnut turbo snail is my favorite snail. Not only is it functional, mowing down hair algae and even red slime cyano, but it is gorgeous. It is a bright, striking orange, so it stands out in the tank. A real eye catcher as it keeps the live rock clean!
Alexis C Holt , MI
We love these snails! Not only are they gorgeous (we have the orange), but ours are algae-eating machines.
1-2 of 2 testimonials