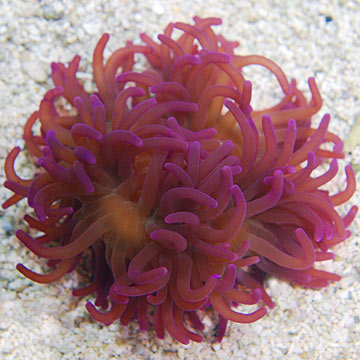 The Long Tentacle Anemone requires an established aquarium with plenty of live rock, moderate to high lighting and a sand or rubble substrate in which it can hide. They may also settle in the live rock where they will attach themselves in a crevice. Be sure not to include incompatible species of fish that may attack the anemone.

The diet should include small pieces of fish or mussel, brine or mysis shrimp and other frozen meaty foods that are marine in origin. Approximate Purchase Size When Fully Expanded: Small: 1" to 2"; Medium: 2" or larger