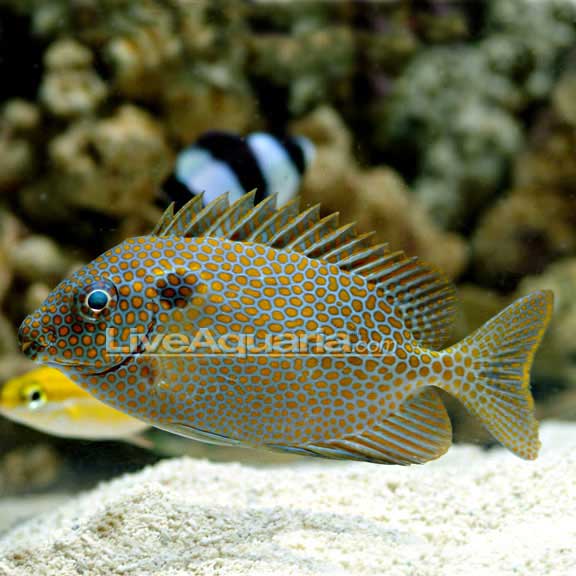 The Gold Spotted Rabbitfish, also known as the Gold Spotted Spinefoot, originates from the reefs of the Coral Sea. The body of this Rabbitfish is brown and is covered in many beautiful golden spots. The spots even work their way into the eye of this fish, which aids in its camouflage.

It requires a 180-gallon or larger aquarium. It is a very peaceful species except when housed with other Rabbitfish. The Gold Spotted Rabbitfish may be housed with more aggressive fish and can be kept in pairs. Its predators will tend to leave it alone because of its venomous dorsal spines, which it can raise when disturbed. Care must be taken when handling this fish to avoid the possibility of being stung by its venomous spines. Rabbitfish are generally reef-safe if they are well fed. If not, it is possible for them to nip at and consume some species of LPS and soft corals.

Write a Testimonial | Ask Customer Service
Ryan M Lake Worth , FL
This is a great fish and I would recommend it to anyone. They have a great personality and great coloration. It loves dried seaweed on a veggie clip and also eats a lot of algae off the rocks. He has not bothered any of my corals and gets along with all the fish in the tank.
1-1 of 1 testimonials