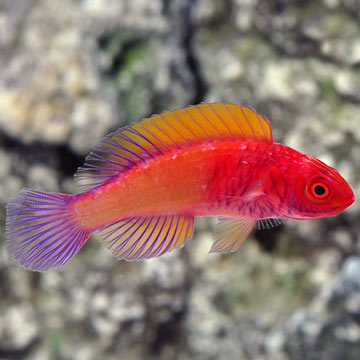 The Red Velvet Fairy Wrasse, also known as the Rosy-scales Fairy Wrasse, originates from the waters surrounding the Maldives islands. The Red Velvet Fairy Wrasse is a small colorful wrasse with the front part of the body being red in coloration with the remainder being yellow. As the fish matures, the scales toward the front of the fish develop dark edges. The color of the female is subdued when comparing it to the brilliance of the male. The male during courting will turn almost white on the sides in an attempt to persuade its mate. Colors may vary depending on the fish's mood.

The Red Velvet Fairy Wrasse is a very peaceful, active fish that will bring both color and activity to a fish-only or reef aquarium of 70 gallons or larger. They will not bother any corals or invertebrates making them a perfect fish for the reef aquarium. These wrasses like to jump, so a tight fitting canopy is recommended.

Write a Testimonial | Ask Customer Service
Candy V Montreal , WI
This fish is as gorgeous as the photographs suggest - the colors are difficult to describe. It needs a very peaceful acclimation period, but within a couple of weeks swims boldly around the aquarium. It is not likely to harass any other fish, but will likely be intimidated if there are other Fairy Wrasses in the tank.
Candy Washburn , WI
Beautiful, subtly colored fish. Can be a bit shy at first, but readily gains confidence in a peaceful aquarium. Mine has eaten anything offered with gusto, while leaving the inverts in the tank alone. A true gem.
Jay Z New Hyde Park , NY
Got mine from Diver's Den. Truly spectacular mix of sherbet colors, and a joy to watch him move about in the tank. Bothers nobody (including inverts), eats eagerly and has convinced my wife that a marine tank is worth having!
1-3 of 3 testimonials