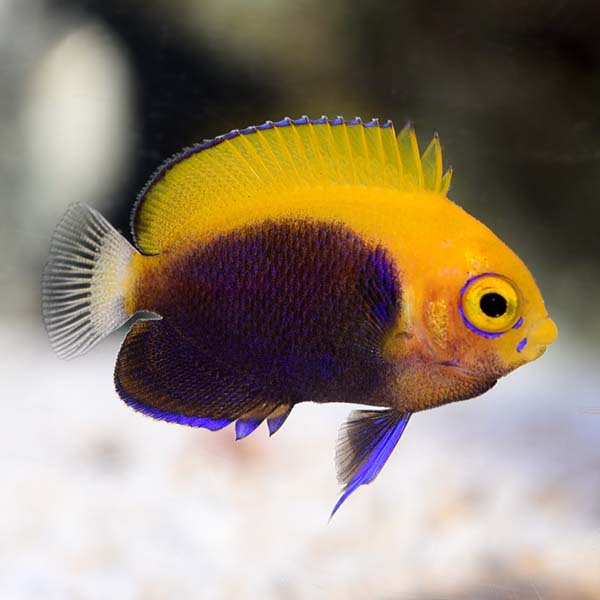 The ORA® Captive-Bred Flameback Angefish, also known as the African Pygmy Angelfish or Orangeback Angelfish, has striking contrasts of blue and orange-yellow colors. While the body is predominately blue, there is a broad and bright orange to yellow swatch from the head along the back to the tip of the dorsal fin. The caudal fin is yellow and somewhat transparent, which distinguishes it from the Brazilian Flameback Angelfish (also known as the Fireball Angelfish - Centropyge aurantonotus).

The ORA® Captive-Bred Flameback Angefish requires a minimum of a 55 gallon tank with lots of hiding places and live rock for grazing. On occasion, this fish may nip at SPS and some species of polyp corals in the reef aquarium.

The diet of the Flameback Angelfish should include Spirulina, marine algae, high-quality angelfish preparations, mysis or frozen shrimp, and other meaty foods.

The ORA® Captive-Bred Flameback Angefish has a unique advantage over wild-harvested species. Captive-Bred Angelfish are very hardy and more accustomed to conditions found in home aquariums. Therefore, it makes a great choice for novices and seasoned aquarists alike.