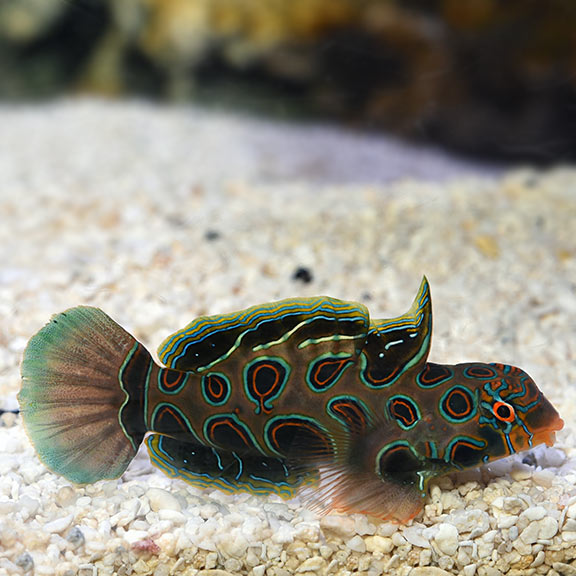 The ORA® Captive-Bred Spotted Mandarin, also referred to as the Spotted Mandarinfish, Psychedelic Mandarinfish, Psychedelic Fish, or Picture Dragonet, was first found in the Western Pacific Ocean in 1976 by Peters. The head, fins, and body are a psychedelic combination of blue, orange, and black spots on a green base. Males may be distinguished from females by their more-elongated first dorsal spine. Only keep one male per aquarium since two males will fight.

It requires a 30 gallon or larger aquarium with live substrate and plenty of hiding places. It is moderately hardy in reef aquariums if given special care. It is not overly aggressive towards other fish, except for conspecifics.

ORA was the first to introduce significant numbers of captive-bred Mandarin Dragonets, also known as Mandarin Gobies, to the commercial aquarium market. The striking colors and patterns of the Mandarin make them one of the most popular and common marine aquarium fish on the market, but the wild-caught specimens have a reputation as being difficult to feed and maintain. Those concerns are resolved as ORA Mandarins have been raised on a variety of prepared foods. Hobbyists of all levels can now own and enjoy these easy to keep Mandarin Dragonets thanks to the research and production efforts of ORA.

Synchiropus picturatus is a peaceful fish that will fare best in the established reef tank provided there are no aggressive tank mates that may compete for food.