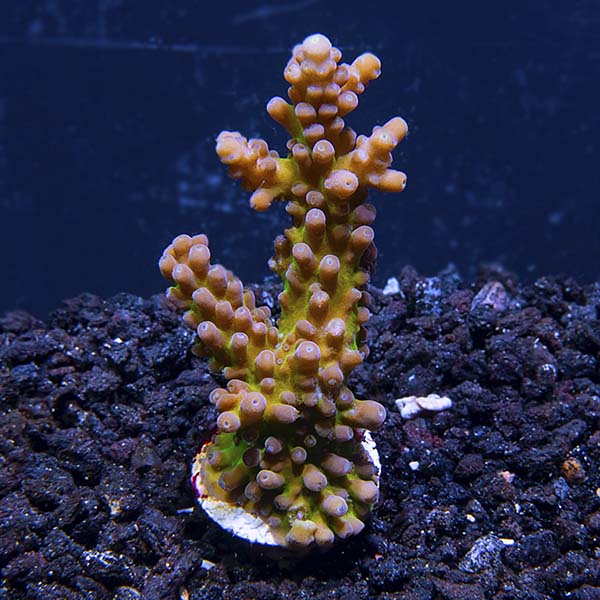 The ORA® Aquacultured Imperial Acropora Coral is a fast-growing coral that will grow long and slender branches that will in time resemble the antlers of a deer. These are very beautiful corals with a green base and boasts tones of orange and red on its growth tips. The polyps of Acropora sp. corals give the colony a fuzzy appearance when fully expanded. Not only does it provide an indication of its health, but also ads much beauty to the overall appearance of the coral.

The growth rate of this ORA® Aquacultured Imperial Acropora is very fast and adapts well to a variety of lighting conditions. It can also be cultured and grown into a new colony from living fragments or broken pieces, if conditions are ideal. The ORA® Aquacultured Imperial Coral prefers a moderately high light level combined with strong, intermittent water current within the aquarium. For continued good health, it will require the addition of supplemental calcium, strontium, and other trace elements to the water.

These aquacultured corals are fragmented from corals that have been raised in captivity for at least 3 or 4 generations. They are not fragmented from wild harvested corals, making them hardier than their wild counterparts. Being fully encrusted, it enables them to ship better with less stress when compared to newly fragmented corals.

They will thrive in a variety of lighting conditions, ranging from power compacts, VHO, T-5's up to the more intense metal halides. Alter their position in the aquarium depending on the lighting and provide at least 3 watts per gallon using one of the lighting systems mentioned above.

It will also benefit from additional food fed weekly in the form of micro-plankton or foods designed for filter feeding invertebrates.

The ORA® Aquacultured Imperial Acropora Coral frags are mounted to an aragonite plug that can be affixed to live rock anywhere in the aquarium with gel super glue or epoxy.