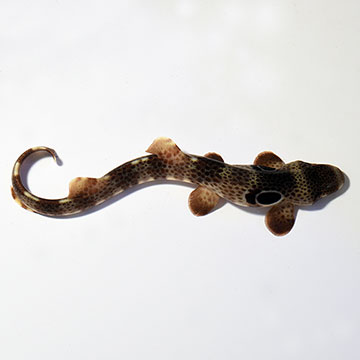 If you are looking to add a reasonably-sized shark to your aquarium, the ORA® Captive-Bred Speckled Carpet Shark is the one for you! The Captive-Bred Speckled Carpet Shark grows quickly but will only reach about 30” in the home aquarium. It has a long tan body, small, round paired pectoral and pelvic fins with most of the shark’s body covered with smaller brown speckles or spots similar to that of a Leopard. Among the speckles are larger “saddle” spots usually located on the side of the body.

The Captive-Bred Speckled Carpet Shark is originally native to northern Australia and New Guinea. This fascinating animal uses its pectoral and pelvis fins to “walk” along the substrate in a wiggling type motion. This method of locomotion comes in handy when the Speckled Carpet Shark ventures into tide pools during low tide to hunt for crustaceans and small animals in the rocks and crevices.

The Captive-Bred Speckled Carpet Shark is considered an “expert only” animal. Provide an establish aquarium 200 gallons or larger in size with pristine water conditions. House with carefully chosen tank mates to ensure long term success. Sand is the preferred substrate as the Speckled Carpet Shark’s abdomen is easily scratched by a coarse substrate which could then cause an infection.