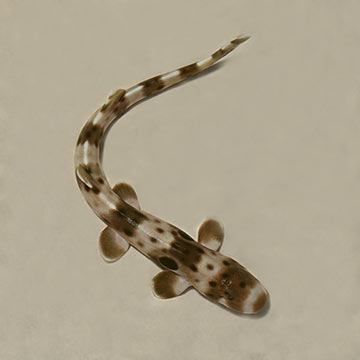 The ORA® Captive-Bred Epaulette shark is considered an “expert only” animal. A tank of 200 gallons or larger with pristine water conditions and carefully chosen tank mates should be adequate. Sand is the preferred substrate for these sharks. The Epaulette's abdomen is easily scratched by a coarse substrate which could cause an infection. These sharks must be provided with a low stress environment with limited disruption, and should never be exposed to copper-based medications. The ORA® Captive-Bred Epaulette Shark is primarily nocturnal and not very active. They are often observed rooting in the sand with their snouts at dawn and dusk searching for buried prey. They will only eat food that will fit in their mouth. They do not tear up prey like other sharks but require bite sized pieces of food which they chew thoroughly. Food should be as fresh as possible, and offered when sharks are naturally active, typically around dawn and dusk. If the Epaulette shark is observed roaming the tank during daytime hours, it needs to be fed more.