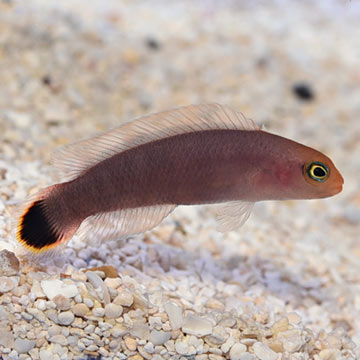 The ORA® Captive-Bred Elongate Dottyback, also known as the Floppy-Tail Dottyback originates from Sulawesi and the Molucca Islands of Indonesia. Sporadic appearances in the aquarium hobby kept the Elongated Dottyback in relative obscurity. However, its many desirable traits got out quickly, making the ORA® Elongated Dottyback a highly-sought-after Pseudochromis. The most obvious trait is its exquisite beauty. Boasting smoldering gradients of vibrant red and orange coloration, the Elongated Dottyback injects bold color to the marine aquarium.