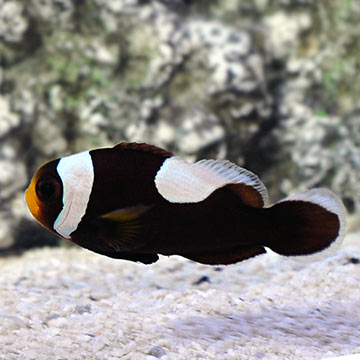 The ORA® Captive-Bred Saddle Clownfish, sometimes referred to as the Saddleback Clownfish, as a juvenile they exhibit an orange-brown coloration with a large white stripe from the forehead to the chest, and white patches that encompasses the back of the fish and resembles a saddle. As the fish matures they develop a darker coloration almost black.

Captive-bred fish have a unique advantage over wild-harvested species, as they are generally very hardy and more accustomed to conditions found in the home aquarium. Therefore, captive-bred fishes make a great choice for novices and seasoned aquarists alike.

The Captive-Bred Saddle Clownfish is a bit more challenging to spawn and rear than other clownfish species in the home aquarium, but with some effort can be accomplished by the dedicated marine aquarist. The females will be the largest of the pair and the two fish will usually stay close to each other in the aquarium. Clownfish are egg layers and will deposit the eggs on a flat surface and defend the eggs from other tank mates. The eggs will normally hatch in 8-11 days depending on the water temperature. The fry must be reared in a separate aquarium on a diet of rotifers followed by baby brine shrimp.