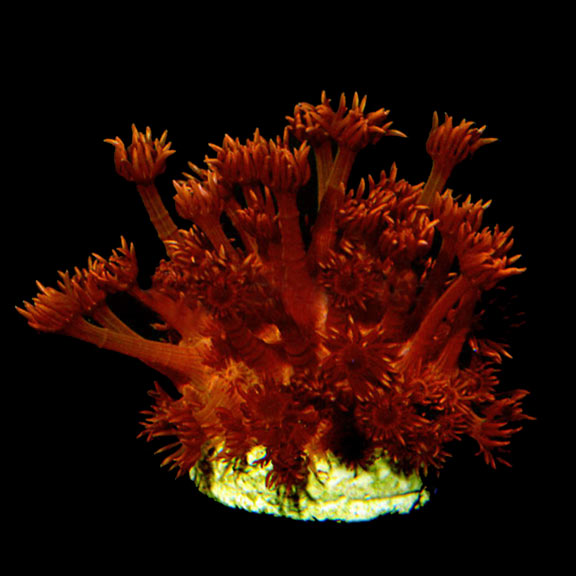 The aquacultured Red Goniopora Coral from ORA® is also referred to as a Flowerpot Coral, Daisy Coral, Ball Coral, or Sunflower Coral. All of the flower references are because of its appearance when all of its polyps are opened. It takes on the visage of a bouquet of flowers. It is the rounded or ball-shaped variety and should not be confused with its branching relatives. It is not overly aggressive, but space should still be provided between itself and other neighboring corals. Its polyps can extend far past its base into the reef aquarium, where it can sting other species of corals.

They will thrive in a variety of lighting conditions, ranging from power compacts, T-5s, powerful LEDs and up to the more intense metal halides. The ORA® aquacultured corals satisfy the majority of their nutritional requirements by means of photosynthetic, symbiotic zooxanthellae algae hosted within its body.

The symbiotic algae zooxanthellae hosted within its body provides the majority of its nutritional requirements from the algae's light driven process of photosynthesis. It will benefit from the addition of foods designed for corals and invertebrates.

The ORA® Aquacultured Red Goniopora Coral is attached to an argonite plug and can be easily placed in holes or between the rockwork of the reef aquarium.