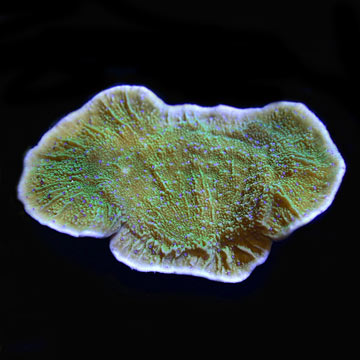 The aquacultured ORA® Blue Polyp Capricornis is fast growing and will form overlapping flattened plates, adding a lovely contrast to the stick-like growth of other stony corals. This light green Montipora is dotted with electric blue polyps and heavy actinic lighting will make them glow like neon. It's best to place this beautiful coral low in the rockwork, so that it won't shade any animals growing underneath its horizontal structure. Capricornis corals grow in a circular, leaf-like shape, and are sometimes referred to as a vase coral. They are very beautiful and fragile corals, and care needs to be taken on its placement in order to protect it from damage.

This Montipora capricornis Coral is peaceful and can be placed in close proximity to other similar peaceful corals in the reef aquarium. For continued good health, it will require the addition of calcium, strontium, and other trace elements to the water. They will thrive in a variety of lighting conditions, ranging from power compacts, T-5s, powerful LEDs and up to the more intense metal halides. The ORA aquacultured corals satisfy the majority of their nutritional requirements by means of photosynthetic, symbiotic zooxanthellae algae hosted within its body.

It will also benefit from additional food fed weekly in the form of micro-plankton or foods designed for filter feeding invertebrates.

The ORA Aquacultured Blue Polyp Capricornis coral is attached to an aragonite plug and can be easily placed in holes or between the rockwork of the reef aquarium.